Wrapping Up Our Stay in the Sweetheart City, Loveland, CO

Loveland, CO, also known as the Sweetheart City, was a short stopover for us to relive a little of Hans history and to do some stocking up before we head into small town territory for a while. It would have been a good hiking stop too, but the weather didn't cooperate this time around.


Loveland boasts a mostly paved 18 mile bike and pedestrian trail around the city. The trail goes through Boyd Lake State Park where we stayed. One day we rode a 15 mile loop from the campground, along the Big Thompson River, then back through city streets.

We did run in to some minor challenges along the way as there is construction going on at various places along the trail due to major flooding in 2013 and also current flooding due to the heavy rains we've experienced this spring.


New Belgium Brewery, located just up the road in Fort Collins, is one of MANY breweries along the Front Range, but we'd been told this one was special (thanks Mike and Keyna!). It's no wonder this tour rates #1 on Trip Advisor's list of Things to do in Fort Collins, it was the most fun brewery tour we've ever taken! This employee-owned company does it right, with beer tastings DURING the tour and a tornado slide at the end!

Our tour guide, Mindy, was lively and knowledgeable, telling us about the sustainability practices used throughout the company and how each employee gets a bike on their one year anniversary and a two week trip to Belgium on their five year annivesary! People temp here for years before getting a chance to be hired, and then they may compete against hundreds for a single job. 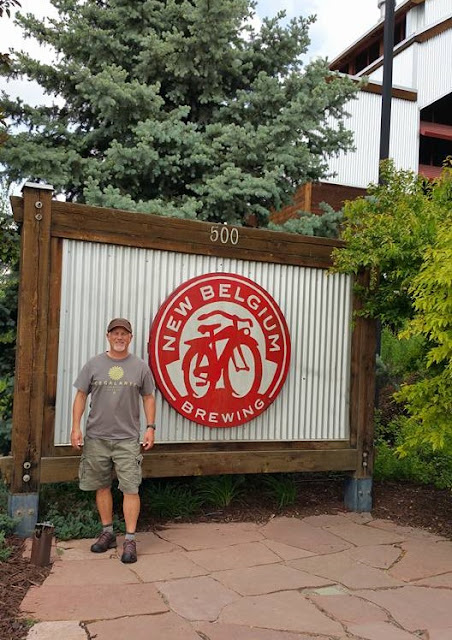 Following the tour, as if we hadn't had enough beer already, we drove a short distance to Odell Brewing to partake of an onsite food truck and listen to some live music. Umami's thai nachos and edamame were delicious, as was the Sibling Rivalry Red IPA.

We spent our four nights in Loveland at Boyd Lake State Park. It's got 148 electric only sites. Roads and sites are paved and each has a picnic table and BBQ pit. The sites are said to accomodate up to 40' rigs and they have a weird curve to them that makes it a little difficult for larger rigs to maneuver while trying to avoid the grass. There is a reasonable amount of separation between the sites.

The park is well off the freeway so it's nice and quiet at night. Though there was no wifi available, we did have decent Verizon signal with our booster. Each camping loop has a restroom building and there is a large central restroom facility that includes pay showers and a small laundry room. All types of water sports are allowed on the lake and there are multiple picnic sites, playgrounds and a swim beach. The Loveland Recreation Trail goes through the state park.

Our stay included a Friday night in early June and we definitely experienced the beginning of summer weekend revelry. RV's streamed in all afternoon and evening, many folks had boats, loud music was played and many campfires burned...a 9pm thunderstorm put an end to all that! This place has got to be crazy busy every nice weekend during the summer months.

The weather was wild during our stay, ranging from 90 degrees and sunny to hail and rain and thunderstorms...and a tornado touched down less than 10 miles South of us. We've both decided that we do not like hail very much! And we'll take a pass on tornadoes too!


Today we head into Wyoming for a couple of brief stops and, unfortunately, we aren't done with the rain yet! Though it certainly cut back on our outdoor activities in Colorado, at least it's making everything around us incredibly green!

Posted by Metamorphosis Lisa at 5:18 AM

New comments are not allowed.