Hitting the Trails Near Silver City

On the days when we don't feel like driving much, there are a number of trails within just a few miles of our campground.

Easiest is to take the nature trail right out the back of our park...no driving at all! 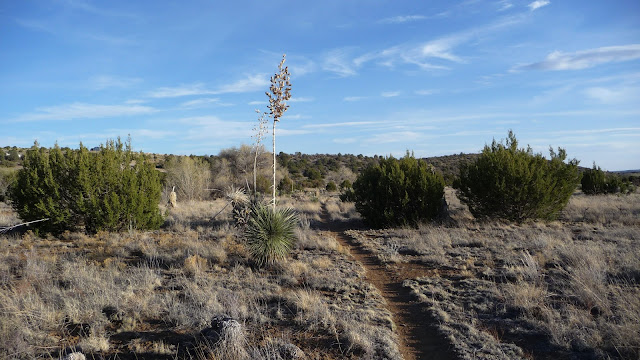 Immediately South of downtown Silver City is the Boston Hill Open Space trail system. From these trails you get expansive views of downtown and the surrounding foothills. Scattered over the hillsides you're walking are the remains of several pit mines from the early days of the town.

Fort Bayard is a National Historic Landmark located about five miles East of town, just off of Hwy 180. The fort was built in 1866 to protect settlers and prospectors from the Apache. Once the Apache were no longer considered a threat, the fort became a tuberculosis hospital and research center. In 1922 it became a Veterans Hospital. Its final days of active duty found it a long-term care facility administered by the New Mexico Department of Health. The site is no longer in use and is falling into disrepair and battles are being fought over whether it should be razed or not.


Out a dirt road beyond the historical site are a number of US Forest Service trails. We hiked a loop that included the Big Juniper Tree. I couldn't find anything that told me how old the tree is, but it surely is impressive compared to all those we saw along the trail!

Some of the Fort Bayard trails look excellent for mountain biking so we will return here before we leave the area.

Just six miles North of town is the Little Walnut - Gomez Peak Day Use Area. There are several miles of hiking and biking trails here as well. Though, wimpy mountain biker that I am, the hills are a bit too steep and rocky in sections for me to want to ride there.

We did a nice four mile loop hike one sunny afternoon and found ourselves in oak/juniper/pinion forest plus a section of ponderosa pine forest.

Posted by Metamorphosis Lisa at 6:10 AM 6 comments:

We are spending a month in Silver City, NM. So far I love our RV park: Rose Valley RV Ranch. The sites are huge with excellent separation between sites using natural space and the price is very reasonable.

This city of about 10,000 people was founded in 1870 on the strength of mining and today there is still mining in the area, though it is diminishing. The local economy is mostly supported by tourism, retirement and arts and is the site of the Western New Mexico University.

The town sits at 5900 feet elevation, just East of the Continental Divide. Close to the Gila Wilderness and the Gila Cliff Dwellings so we'll have a variety of recreational opportunities to explore during our stay.

Downtown, like most small towns in this part of the country, is a bit frayed around the edges, many of the buildings having been built in the late 1800's. Local artists are doing their part to add some color and bring some life back into the core. Here's a little taste of a walk downtown. 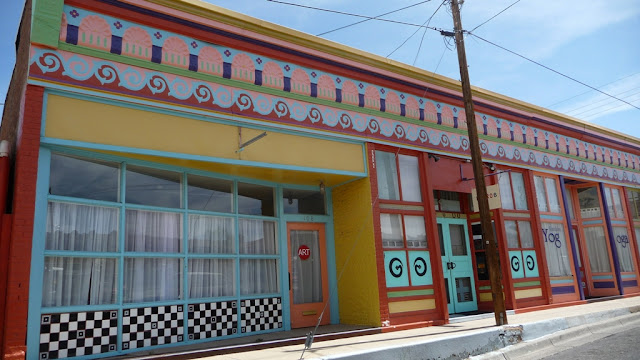 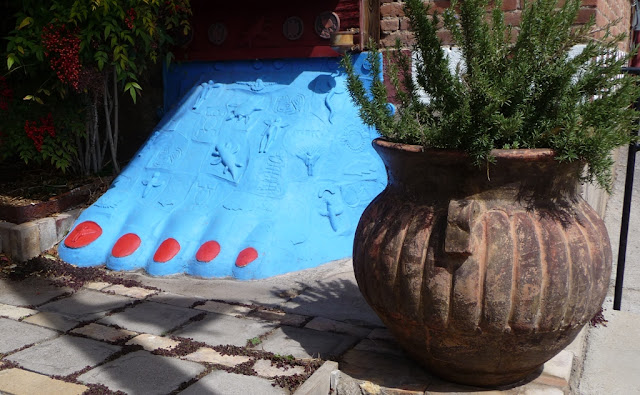 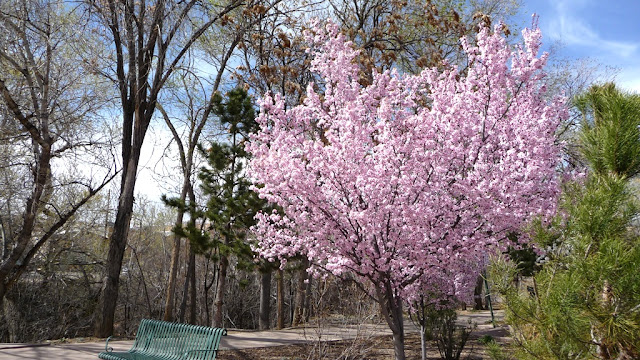 Posted by Metamorphosis Lisa at 7:12 AM 5 comments:

Roper Lake State Park sits just South of Safford, AZ and immediately East of the Pinaleno Mountains. Mt. Graham, the highest peak in the Pinaleno's, looms impressively over the area at 10,720 feet. Like all water sources in the desert, this lake makes for a good birding site. During our stay the yellow headed blackbirds were most prominent; there seemed to be thousands of them!

The park offers 45 electric/water sites, each with a picnic table, shade ramada, and fire ring. Roads and sites are paved and level. We had site #14 which opened onto an open area lined with trees and reeds with the lake just beyond them. We only had a neighbor on one side, our non-view side. Perfect!

Facilities include a few new looking rental cabins, group camping area, day use areas, non-motorized boating, fishing, swimming, restrooms with showers, and a small natural stone hot spring (which we did not try--it seemed to get a lot of use).

You can walk or ride a bike all the way around the lake. We discovered if there is no wind there are zillions of tiny flies or gnats. They don't bite, but they are ever present. The swallows like them!

For $23/night, this was a lovely place to stay. Fluctuating fair to decent 3G Verizon service with our booster and trucker antenna. Plenty of services just a few miles down the road in Safford.

Posted by Metamorphosis Lisa at 6:38 AM 3 comments:

Adventures from Our Roper Lake Hub

We're wrapping up our short stay at Roper Lake State Park, just South of Safford, AZ. This park is yet another Southern Arizona birding mecca, and we have seen thousands of yellow headed blackbirds. In the evenings they swarm around in huge flocks, alighting on trees for a few minutes then taking off all at once; it's spectacular!

On Saturday we decided to check out some of the riparian areas that are scattered around this valley. First we attempted to hike along Ash Creek from Pima, AZ. Despite the nice description, we discovered the lower elevation trail head is not really a trail...it is a very rough jeep road, very exposed as you head up to the mountains, not really a riparian habitat. The creek was pretty, but the "trail" just wasn't what we were looking for.


Next we decided to explore the Gila Box Riparian National Conservation Area. One of only two riparian national conservation areas in the country, Gila Box is an oasis in the desert with four year-round waterways.  We headed for the Bonita Creek Wildlife Viewing Area. We didn't have much luck in the middle of the day, but wildlife lovers and birders should find this site interesting in the early morning and evening hours. There are two primitive campgrounds in the Conservation Area. Access to this area is via a long dirt road with many steep sections...big rigs not advised!


On Sunday we headed up into the mountains. The Pinaleno Mountains tower over the valley we are staying in. The high point is Mt Graham at 10,720 feet. We ended up hiking Heliograph Peak, the little sister at 10,028 feet.


We knew the road might be closed for the season (opens April 15) but figured we'd go as far as we could. The road starts out at about 3,000 feet and we curved our way up to just over 9,000 feet before we reached the closure.

Luckily the road closure happened at a good place for us to take a hike. We parked and walked in to the Shannon Campground, hoping to take a trail up to the top of Heliograph Peak.

We found the trail and headed out, hoping we wouldn't have to go back and take the road up the peak due to snow.


Soon the hillside became almost vertical, the snow no longer showed a trace of the trail, and it became too dangerous to continue. We retraced our steps back to the campground entrance and headed up the road to the peak.

Heliograph Peak got its name in the 1800's when soldiers manned stations atop several peaks in SE Arizona and SW New Mexico using mirrors (heliographs) to flash messages during a campaign against the Apache.

Tomorrow we head into New Mexico!

There are not a whole lot of options with full hookups near the Chiricahua Mountains, so Ft Willcox RV Park was our choice for a place to stay while we explored.

This is a Passport America park, so the rate was reasonable. Roads are gravel as well as the sites. There are 26 sites, each with a picnic table; sites are quite close together. Small laundry room and that's about it. We had good, solid 3G Verizon service.

The park is maybe a mile from I-10, but sits on I-10 business route, so there is some road noise.

This place is nothing fancy and served its purpose for us as a way to visit Chiricahua National Monument (40 miles away) and Ft Bowie National Historic Site (33 miles away). Both of those sites were well worth a stopover at a very plain RV park. 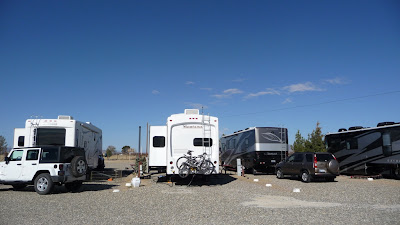 Posted by Metamorphosis Lisa at 9:15 AM 5 comments:

Fort Bowie: An Excellent Combination of History and Nature

Fort Bowie National Historic Site is unlike any other "site" we've ever seen. From Hwy 186 out of Willcox, you drive eight miles out a dirt road to access the trail head, then hike 1.5 miles to the site. It's a neat combination of being immersed in the environment, seeing foundations of buildings from the past, reading details and first-hand accounts of the events, and seeing photographs from the period.

Apache Spring was the source of much conflict during the mid-late 1800's, being a vital source of water through mountainous terrain. Chiricahua Apache defended their land against intrusion by the Butterfield Overland Mail stage route. As those conflicts escalated the US Army settled in to maintain peace and eventually to overcome the Apache.

This combination of history and hiking through interesting territory really appealed to us. And, we were fortunate to have an overcast day for the hike. You can also park a few miles back up the road from the Ft Bowie trail head and take the Butterfield Stage route for a mile or so to hook up to the Ft Bowie trail. It looked like there could be some good hiking/scrambling up a wash to the interesting looking granite peak called Helen's Dome. Good reasons to return some day for another hike!
Posted by Metamorphosis Lisa at 8:12 AM 5 comments: