Settled for a Month in Sequim, WA, Week One

We love settling for a month in one place and our first week in Sequim has flown by. Though not as vibrant as our last stop, Port Townsend, Sequim is a peaceful little town perfectly located for our explorations of the NE portion of the Olympic Peninsula.

We chose to spend the month at John Wayne's Waterfront Resort, just outside of town and situated on Sequim Bay. Right across the street is Sequim Bay and a pretty marina park, right behind our RV is a small meadow and a short forested trail through the RV park grounds, perfect for walking Rosie and short strolls in the evening. 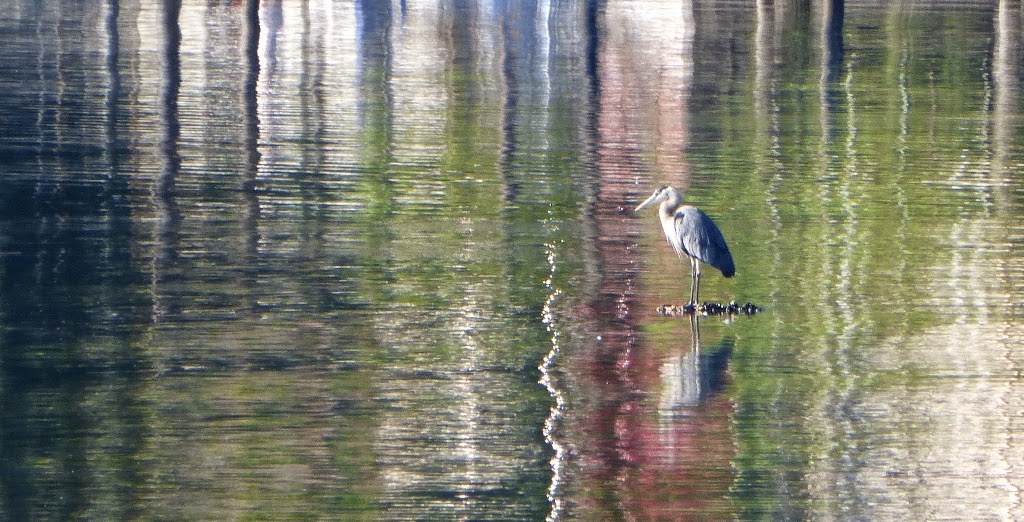 Our explorations in the past week have taken us deep into the forest, on pretty coastal walks, and on top of a peak with views to blow your mind. Looks like this is going to be a fabulous month!

First stop, into the forest! We hiked the Lower Gray Wolf River Trail in the Olympic National Forest. This lovely trail took us through a moss covered fairyland to the Gray Wolf River, one of the prettiest rivers I've ever seen. 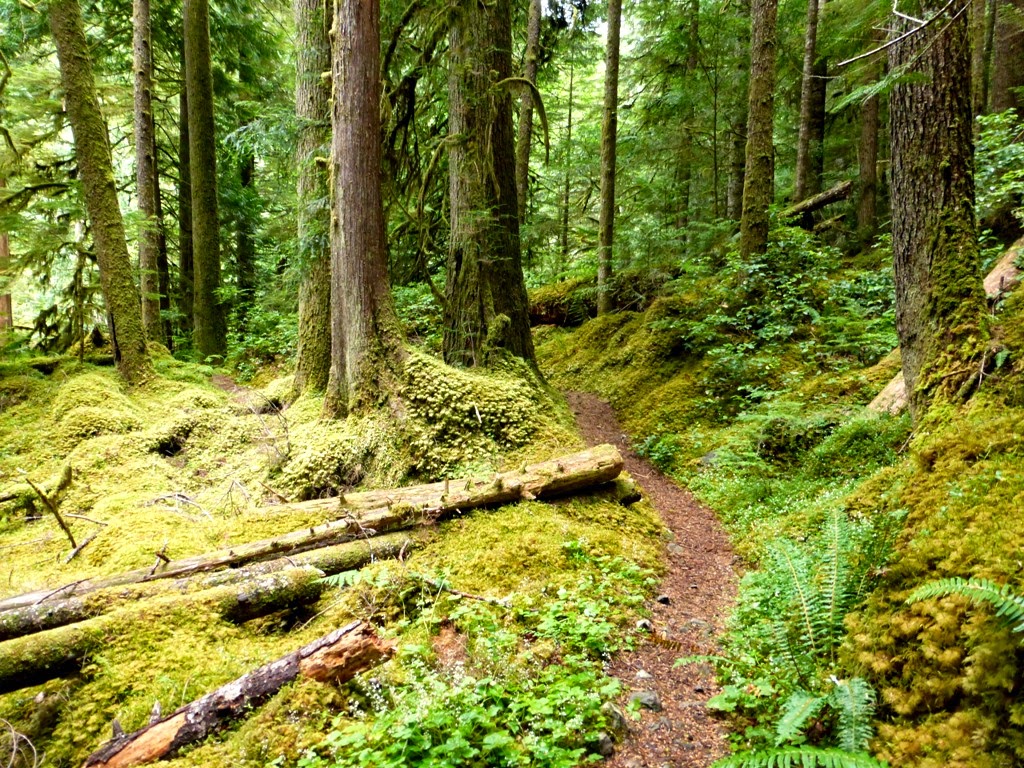 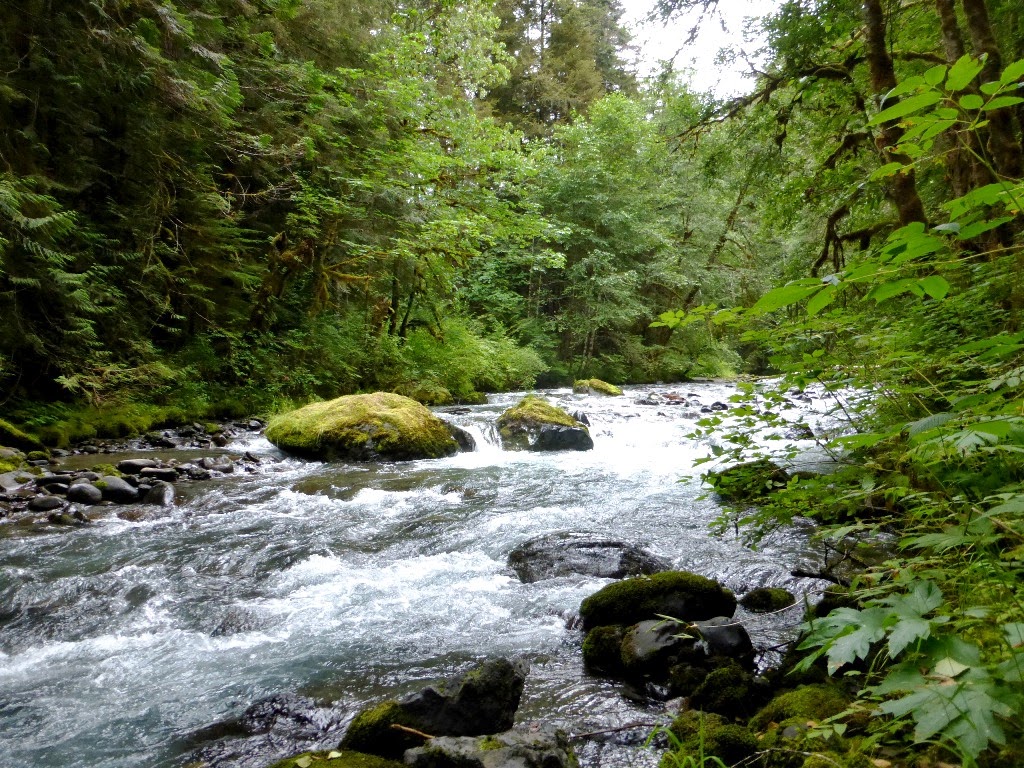 In Sequim we enjoyed a morning of raspberry picking at Graysmarsh Farm, where various berries were only $2/pound and blueberries were $2.50/pound. We ended up with 6.5 pounds (not counting what we ate straight from the vine!) and I made several tasty treats from the bounty and froze quite a lot for future use. 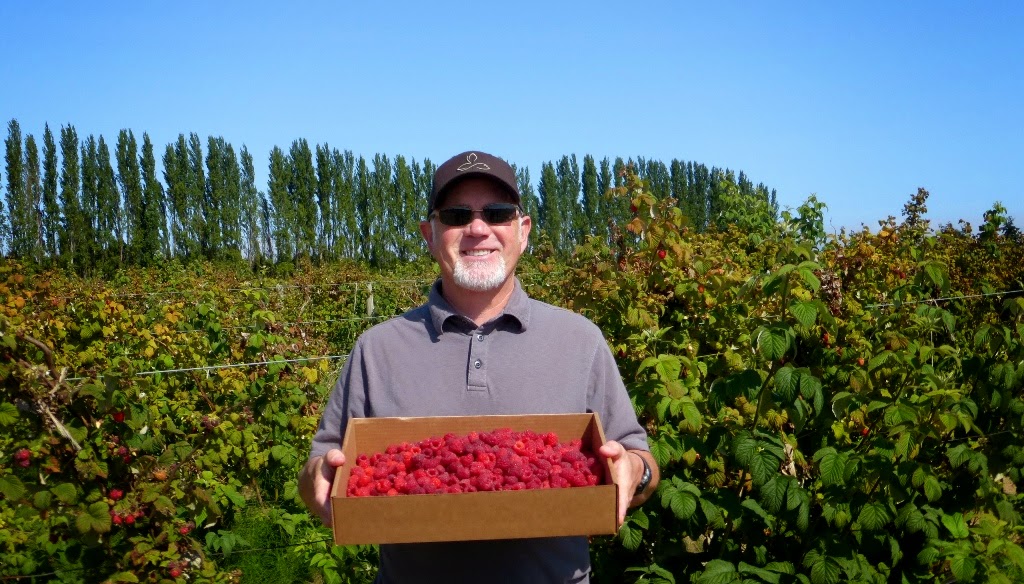 Another day we drove 15 miles West to Port Angeles, the largest town along the North coast of Washington and a major gateway to Olympic National Park. It has a deep water harbor formed by Ediz Hook and ferries take off from here to Victoria, British Columbia. This town has a lovely waterfront trail, views into the Olympic Mountains, views across the Strait of Juan de Fuca to British Columbia, and several wonderful murals scattered through downtown. We enjoyed a tasty lunch at Next Door Gastropub. 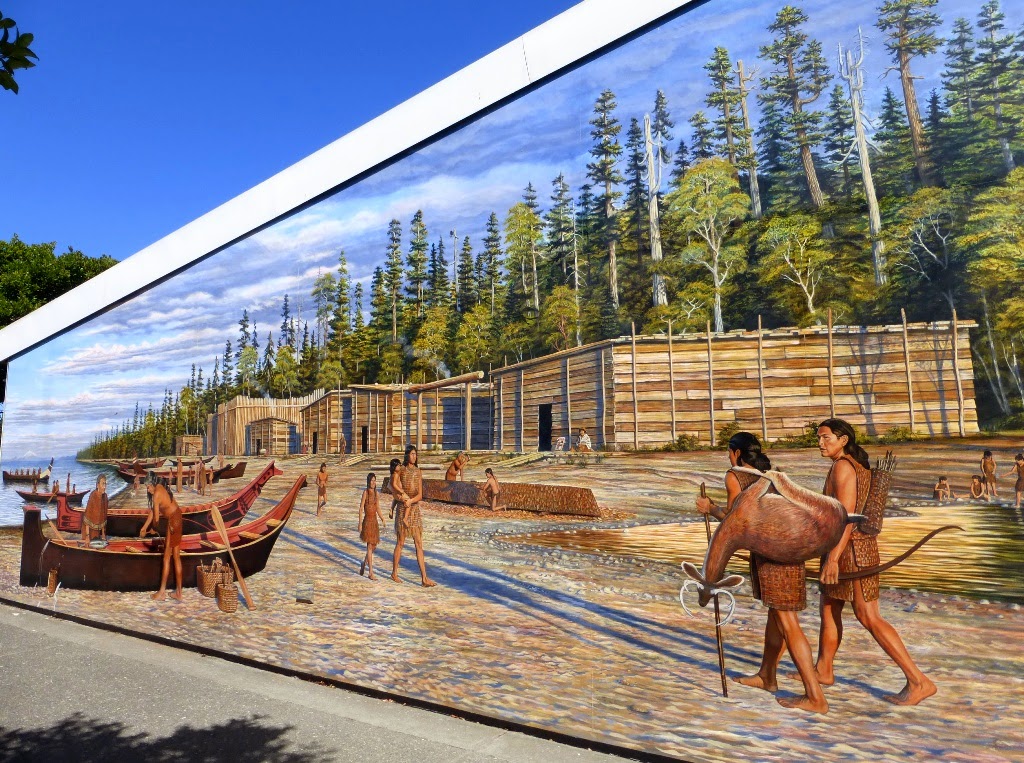 Yesterday we went on a fabulous hike with Bill and Christine, friends we met in Tucson this past winter who live up in this neck of the woods. The hike they chose, Mount Townsend, was amazing...flowers exploding off the hillsides and views for miles and miles. There is some serious elevation gain on this trail, but it was worth it for the views of Mt Rainier, Mt Baker, the Northern Cascades, Hood Canal, Puget Sound, the Strait of Juan de Fuca, the jagged spires of the Olympic Mountains...the list goes on and on. 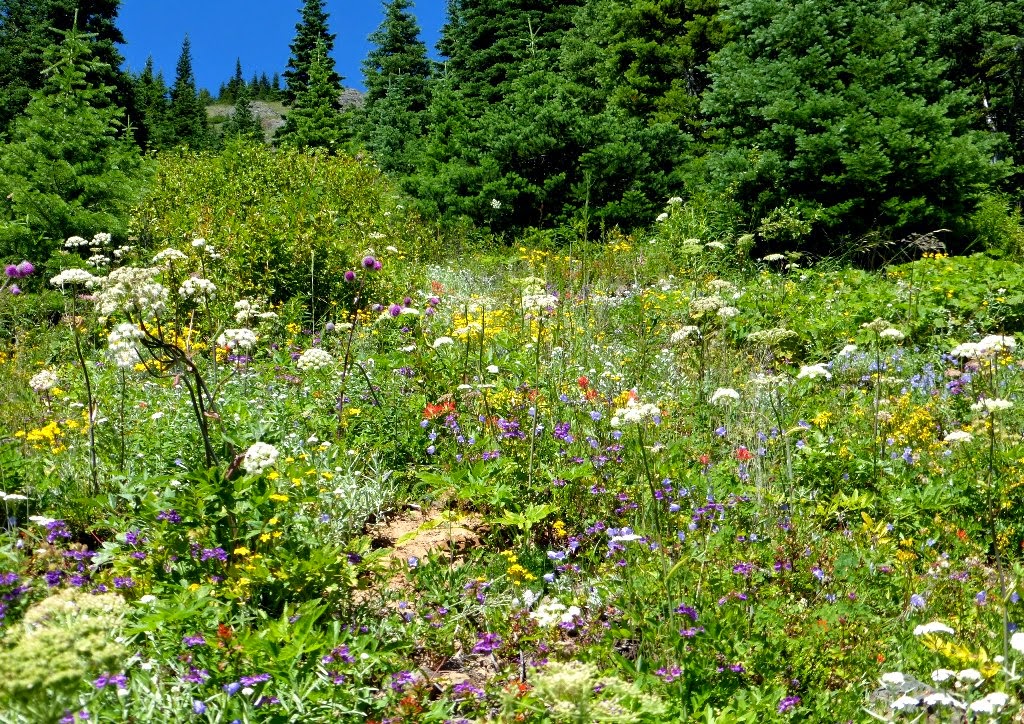 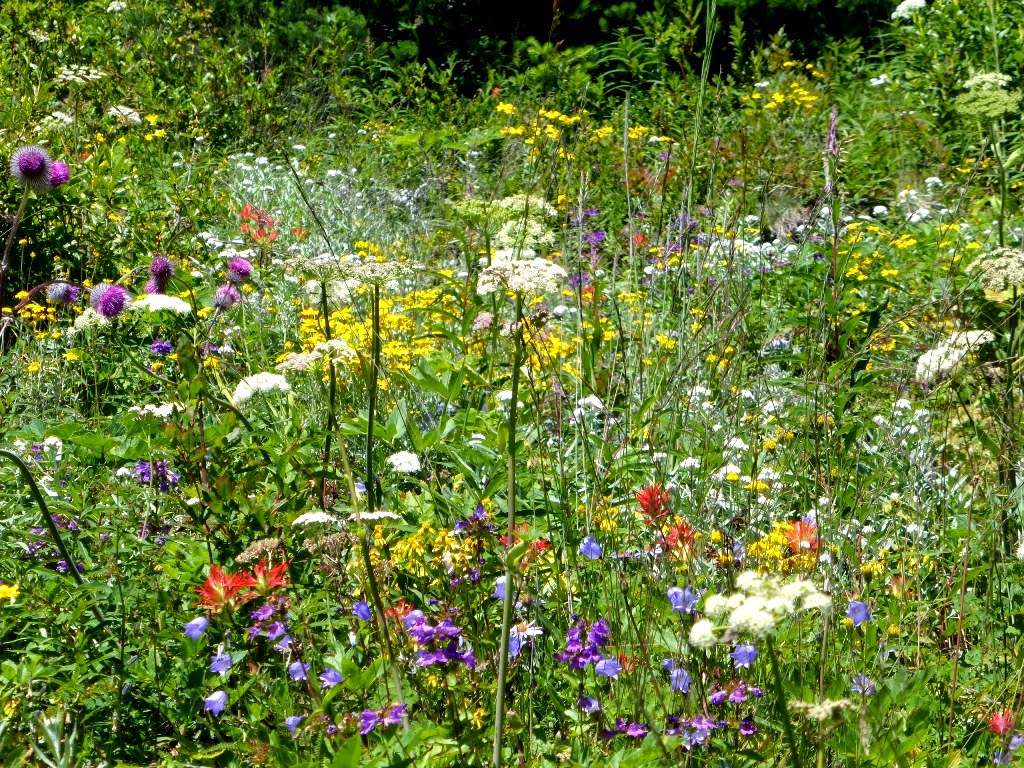 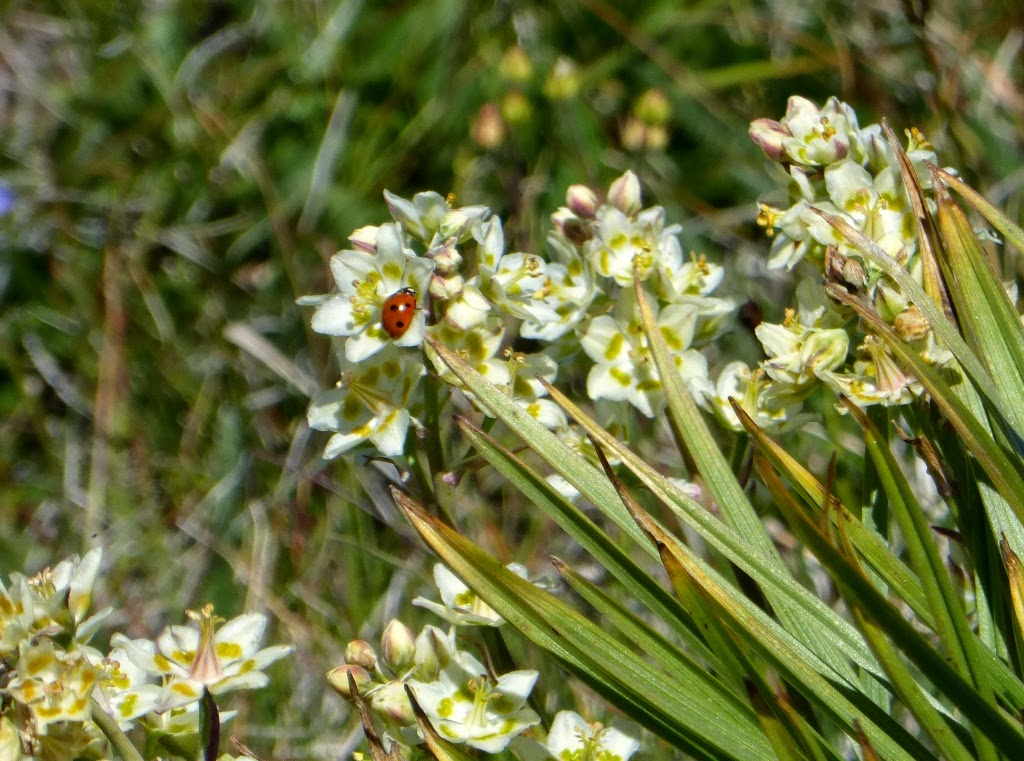 So ends week one in Sequim. The weather is perfect and we're enjoying some down time too, one of the best parts about spending a month in one place.
Posted by Metamorphosis Lisa at 9:24 AM 19 comments:

In my last post I mentioned we are staying at Fort Worden State Park in Port Townsend. But this fort is just one of many in the area. Port Townsend is bordered on two sides by waterways, the Strait of Juan de Fuca to the North and Puget Sound to the East, historically making this area an important strategic defense site for the US military. We visited two other nearby forts during our stay.

Fort Flagler (on Marrowstone Island), Fort Worden (in Port Townsend) and Fort Casey (on Whidbey Island) made up the Triangle of Fire in defense of Puget Sound from 1897 - 1953. None of these forts had a reason to fire their weapons in a military skirmish but were primarily used as training facilities for both World Wars.

Like Fort Worden State Park, Fort Flagler State Park has numerous historical military structures that you can hike in and around over several miles of trails. There are also two campgrounds, one in the forest with small dry camping sites and one on the beach with a mix of full hookup and dry camping sites that would fit large rigs. 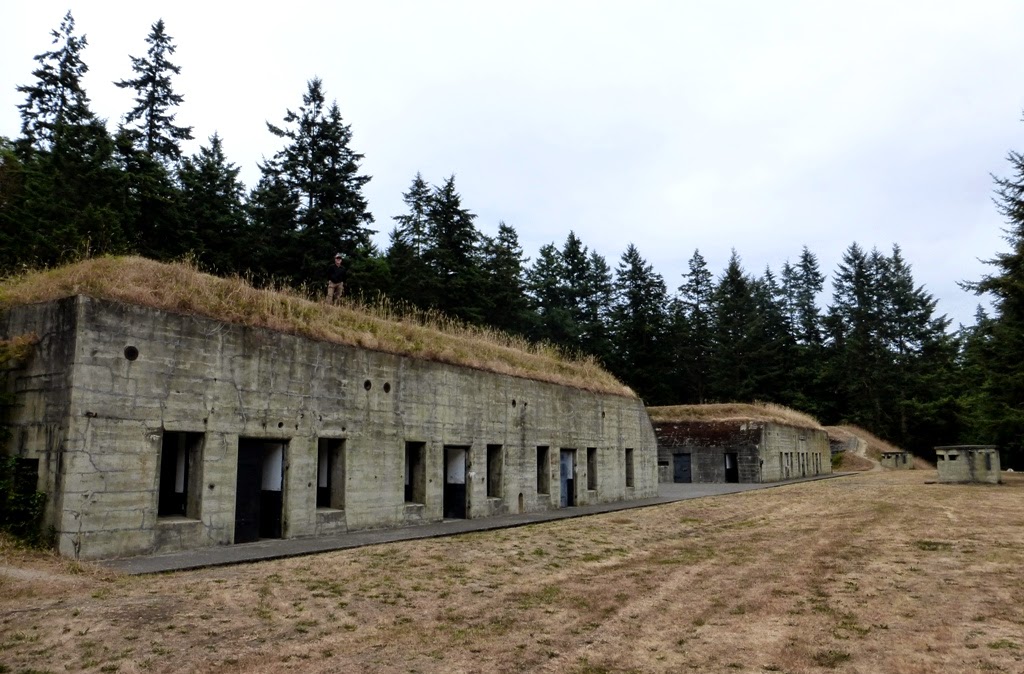 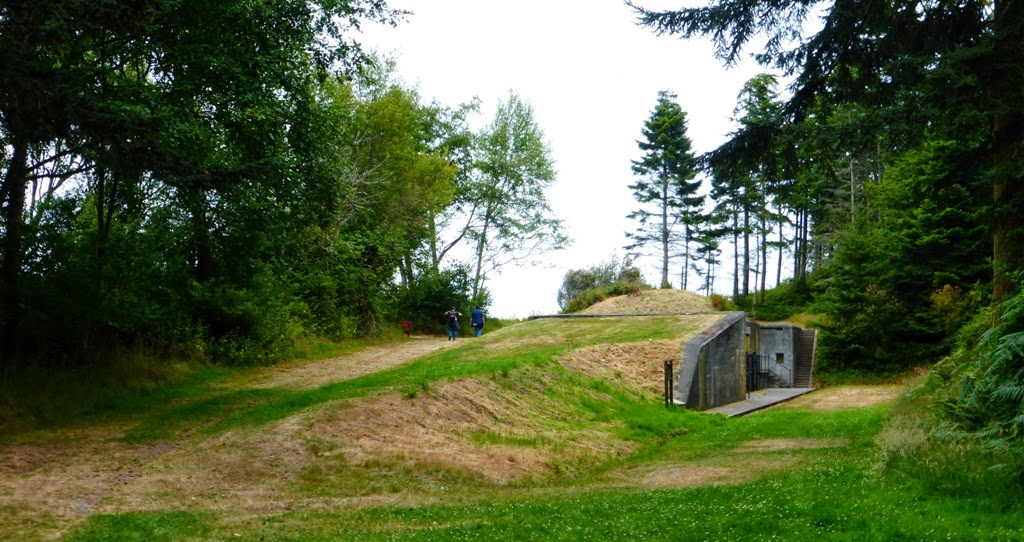 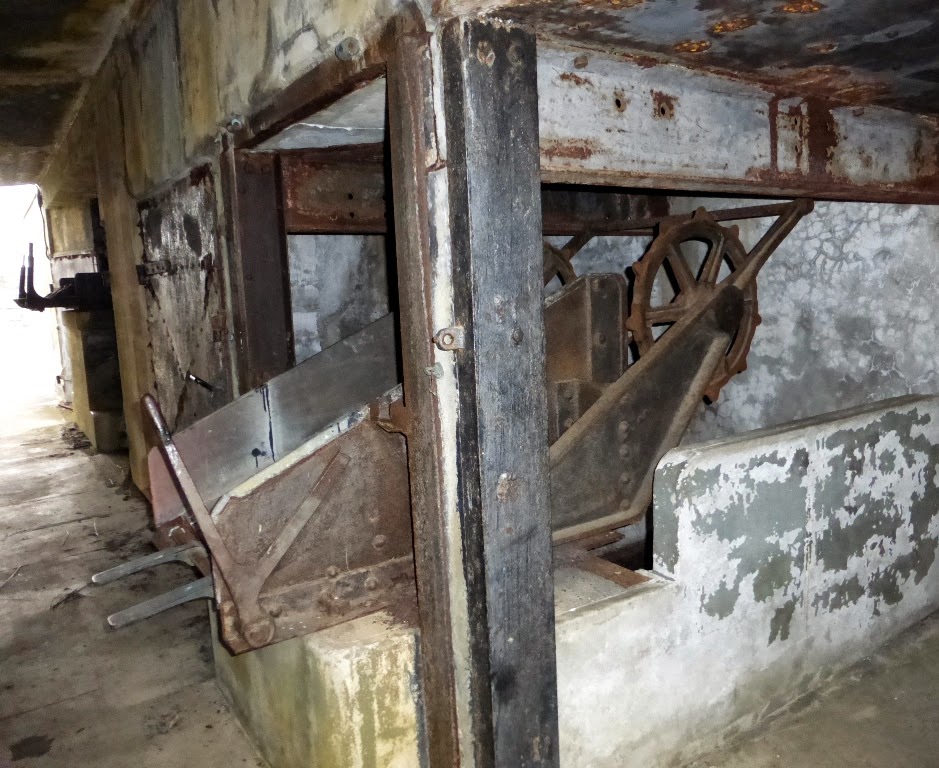 Surrounded on three sides by water, there is some very nice beach walking at Fort Flagler.

Fort Townsend State Park is a little different from the other two forts we've visited. This fort was built in 1856 by the US Army for the purpose of protecting white settlers. Very little remains of the fort so a visit here is less historical and more about hiking the lovely forest trails.


Port Townsend is a waterfront town and we were pleased to see that it is easy (and free) to access the coast all over town. We stopped at Port Townsend Brewing for some delicious beer and live music on Sunday afternoon then took a stroll through the neighboring boatyards to the waterfront. 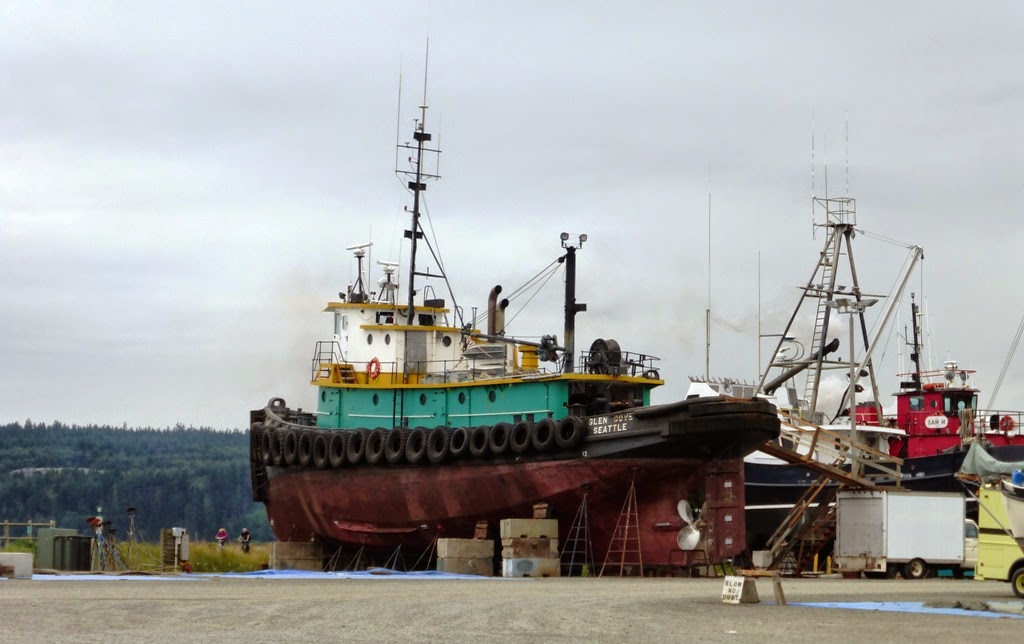 Our time in Port Townsend happened to overlap with Paul and Nina of Wheeling It fame for one night so we got together for dinner at home. Though we read each others blogs we hadn't been in the same place since early 2013. There's always plenty to talk about when RVers get together, just add wine and food and it's a gab fest! Good times!

We learned a neat little tidbit about Fort Worden from our campground hosts: this happens to be the Jazz Port Townsend Workshop Week. All the workshops happen on the Fort grounds and you can walk the property in the evenings and listen to jazz for free. We took a little stroll around the Commons after Paul and Nina left and got an earful of wonderful music, pretty neat little freebie!

So ends our week in Port Townsend. It's a very special town with a bohemian, independent, eco friendly vibe, a great farmers market, wonderful neighborhoods with extensive hiking trails...I could see myself living here. About the only negative to this place is the stinky paper mill at the South end of town!

Today we're off for our next stop: Sequim, WA. We'll settle in for a whole month in one spot and take our exploring at a leisurely pace.

Posted by Metamorphosis Lisa at 6:53 AM 18 comments:

A Not so Simple Transition to Port Townsend, WA

We spent several nights on the outskirts of Seattle, vising with family, taking care of some business and dealing with the insane amount of traffic that that city generates. Auburn, just SE of Seattle, has a campground in the Game Farm Wilderness Park that allowed us reasonable access to Seattle without pulling the fifth wheel through the inner city.

On Tuesday we were off to the Olympic Peninsula. Unfortunately our transition from Seattle to Port Townsend was not so smooth. About halfway into our two hour drive I heard a strange noise and looked back to see smoke and small bits of tire flying...we had a blowout. Hans pulled over immediately, thankfully the shoulder was just wide enough to accommodate us. The right front trailer tire had blown, it was only two years old and Hans had checked the tire pressure so all should have been well.


Fortunately the blowout was on the shoulder side of the highway, not the highway side! Vehicles were whizzing past us at 60 mph with no room to spare on the highway side. We were grateful to have the automatic leveling system on the trailer...we unhooked the truck and proceeded to raise the trailer up on its levelers so we could change the tire. We were back on the road within 45 minutes. Scary doesn't even begin to describe those 45 minutes!


We're staying in Port Townsend, at Fort Worden Sate Park. Fort construction began in 1897 and it was active in one form or another until 1953, and became a state park in 1955. Its 434 acres include historical fort buildings, museums, a conference center, two campgrounds, water sports and beach access, hiking trails, all within minutes of downtown Port Townsend. There are 12 batteries left standing on Fort grounds and you can hike to and explore inside most of them. Here's a few photos from our hikes around the Fort:


Port Townsend is a Victorian waterfront town with an artistic vibe. Once a bustling port and fort town, today cute shops and restaurants invite visitors to stroll and spend their money. Thanks to a tip from the helpful staff at the local visitor center, we enjoyed some tasty fish and chips at Silverwater Cafe.

Fort Worden State Park is so popular that when we made reservations last October we could not get an entire week in one spot. We spent the first three nights at the full hookup beach campground, with nice large well separated sites; then moved to the upper forest campground with water/electric hookups for four nights, where the sites are much closer together.

On our campsite transition day (today) we took the trailer in to the local Les Schwab tire store to get four new tires on the trailer. We were happy to learn that, as Oregon residents, Les Schwab was able to sell us the tires with no sales tax, it seems merchants have an agreement with the state of Oregon to encourage Oregon residents to shop in Washington...sweet! Port Townsend Les Schwab did a fine job, very friendly, professional and efficient.

Now that business is taken care of we can really relax and enjoy the rest of our week in Port Townsend!

I love mountains. They are striking and stately, majestic even, towering over us all. You can't help but admire them, their rugged beauty, ancient history, one of nature's most impressive feats. But they can be volatile too. Mount St Helens (MSH) has enticed me for years, she's gorgeous and dangerous all at once. Of course she had to go on our Summer in Washington itinerary!

The Johnston Ridge Observatory is the visitor center at the end of Spirit Lake Highway (hwy 504), the Western entrance to Mount St Helens National Volcanic Monument. From the Observatory, we hiked to Harry's Ridge, an 8 mile RT journey through the blast zone of the May 1980 eruption. Harry was a long time resident of Spirit Lake in the shadow of Mount St Helens, he couldn't bear to leave when she erupted and remains there with his beloved mountain in spirit today.

This was an amazing trail and we hit it at the perfect time of year...flowers were exploding all over the hillsides, it was sunny and 75 degrees, very few people on the trail...I think we'll have to call this a Favorite!