Heading North on the Oregon Coast: Nehalem and Seaside

Our next stop was a few nights at Nehalem Bay State Park, another place we've stayed before (Sept. 2014). The park was practically full every night, with lots of folks on the move along the narrow roads, so we were grateful for a peaceful dune forest right behind our site where we could escape the hustle and bustle around us.


Even though Oregon state parks are extremely popular and very busy, we still love the fact that there are always trails right from the campground. A morning walk around the spit dividing Nehalem Bay from the ocean gave us solitude and beauty without having to drive at all.


When the weekend arrived we moved north to Circle Creek RV Park just outside Seaside, OR. Little did we know when planning our stops for the summer that the Hood To Coast Relay was happening this particular weekend. Seaside, OR is the finish line for this very popular event and tens of thousands of people would descend on this small beach town over the weekend.

Our RV park was full, but being on the outskirts of town was just outside the edge of the high traffic zone. If the park had any trails it would have been perfect, but fortunately we found a couple of trails to hike that took us away from the craziness of town.

We hiked a 2.5 mile loop at nearby Ecola State Park along with a walk on Indian Beach. The loop trail is a segment of the Lewis and Clark National Historic Trail and leads to a fantastic view of decommissioned Tillamook Rock Lighthouse. Indian Beach is a very popular place on beautiful summer weekends...arrive early to snag a parking spot! 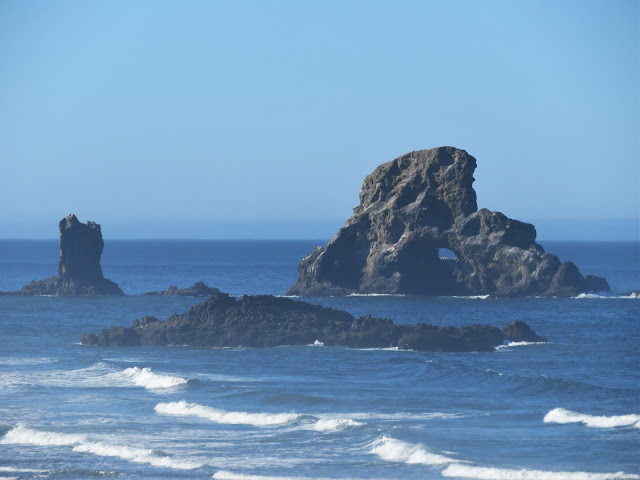 We did venture into Seaside for a couple of walks. The town has a lovely 1.5 mile ocean front promenade and an old timey beach town atmosphere (before the relay participants overrun the area!).

Saddle Mountain trail is a popular hike due to its proximity to both Portland and the coast. This 5.2 mile out and back trail climbs 1,600 feet to expansive views atop a basalt formation. On a clear day distant snowy peaks are supposed to be visible...unfortunately smoke haze limited our views. Thank goodness we arrived at the trailhead by 9am...this really is a popular trail! 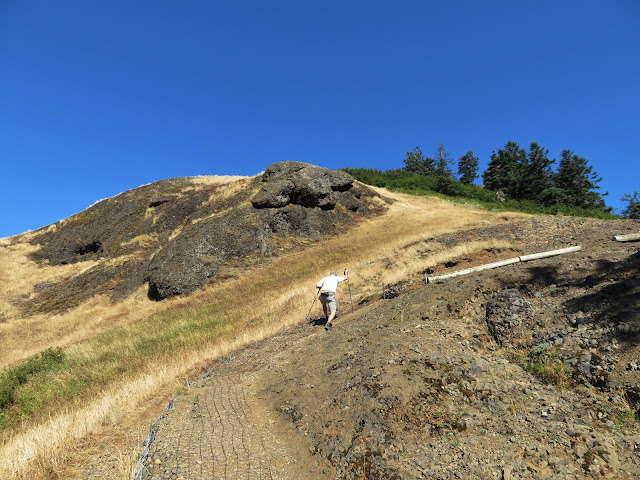 Next up: our final stop along the Oregon coast for this summer...
Posted by Metamorphosis Lisa at 9:16 AM 15 comments:

Continuing Along the Oregon Coast: Newport and Lincoln City

In my last post I mentioned we'd continue up the Oregon coast spending week days at state parks and weekends at private parks thanks to the extreme popularity of Oregon state parks in the summer. Our next stop was a few nights at South Beach State Park in Newport, OR.

We've stayed at this park before (Sept. 2014) and this time around enjoyed lovely perimeter site D5. Though the park was full every night and the roads are packed with an almost continuous stream of vehicles and people walking and biking, having a quiet area facing a forested sand dune right behind our rig gave us a bit of a reprieve from the masses surrounding us.

Forested dunes separate the campground from the ocean, so it's just a short walk from camp to the beach. With several miles of trails in the park, both paved and natural, plus a very long lightly used beach, it's easy to spend time in nature without having to drive at all. Bonus: the mosquito's our friends ran into in June were pretty much gone by the time we arrived in August!


We did do a couple of hikes outside the park, the first being a nice little combination forest and neighborhood hike along Big Creek at the north end of town.


The second being a few miles at the Beaver Creek section of Brian Booth State Park just south of town.


Ona Beach State Park turned out to be an interesting beach walk when I found shell fossils.


Many months ago when we made our reservations on the Oregon coast we weren't even thinking about the eclipse, so when our reservations in Lincoln City happened to fall in the path of totality we considered ourselves very fortunate. There was no price gouging at Wapiti RV Park and the park was not as full as they had been expecting.

Lincoln City, like the rest of the country along the path of totality, had been preparing for massive eclipse crowds for over a year. We were scheduled to leave Lincoln City on the day of the eclipse but when we got an email from the Oregon State Park system asking us to cancel our reservation on August 21st and to stay off the roads if possible we elected to spend an extra night at Wapiti.

The best hike we did in Lincoln City was Hart's Cove. It's a 5.5 mile out and back that starts out going down, down, down through typical lush coastal forest to a wonderful view from Cascade Head. Of course, what goes down must come back up...so it was a terrific workout with some fantastic coastal views. 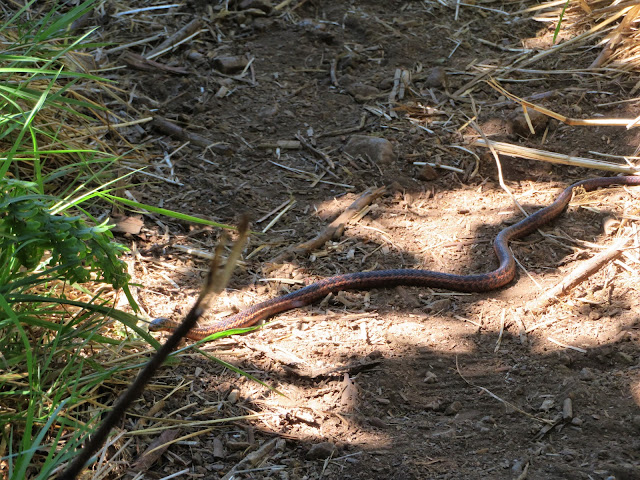 We had gorgeous sunny days leading up to the eclipse, but the morning of dawned foggy. We anxiously awaited the 9:05am start...and the skies cleared up just in time! Excitement built as everyone in the park watched the show overhead and all around us as the skies darkened and the temperature dropped dramatically. The temperature drop made the fog approach once again...but fortunately not enough to obscure the eclipse! Though my final photo does not do the big event justice, we did get a fantastic view of the corona through our binoculars.

The coast did not receive as many eclipse visitors as they'd hoped and feared...probably due to the high potential for clouds and fog. Leaving Lincoln City on August 22nd we did endure quite a lot of traffic heading north, but that was due to a four car accident blocking the two lane highway. It ended up taking us 4 hours to go 76 miles! But that's all behind us now...

Wrapping Up a Month in Charleston, OR

Our month in Charleston, OR has come to an end. We've been fortunate to have about 45% sunny days, the rest being overcast or foggy...this seems to be pretty typical for the Oregon coast in the summer so we aren't complaining! I actually prefer a damp hike through rain forest terrain than a dry trek; the wet brings out the critters and the mushrooms and gives the lush forest a wonderful green glow.

Even though an entire month may have been a little long for what this area offers, we've really enjoyed having a long sandy beach with a reef and the ocean a short walk from our doorstep. I've spent many hours in peaceful solitude communing with the ocean environment.

One bonus to spending a month in Charleston was proximity to Roseburg. During a recent heat wave Chantal and James drove out one Saturday to escape the 100 degree heat in Roseburg and enjoy lunch with us in Bandon and a comfortable 65 degrees on the coast...and we got a huge pile of veggies from Chantal's garden!


When our friends John and Pam diverted to the OR coast for a couple of weeks we were excited to meet halfway between our respective camp sites. Tugman State Park has a nice three mile trail along Eel Lake...a great spot to reconnect with friends over our favorite activity!


The long stay gave us an opportunity to hike all the trails at Cape Arago multiple times in different conditions. Though not on any park maps, we discovered a "secret" trail that runs from Cape Arago highway near the service entrance at Shore Acres State Park to the Cape Arago Pack Trail. One person has written about this trail calling it the Perimeter Trail. Here's a few more photos from this lovely trail.

Today we begin a series of short hops up the Oregon coast. Even though we made our reservations in January, we could only get week days at the state parks...weekends will be spent at private parks for the next few weeks. With temps in the mid 60's and the beach nearby, it's all good!