We had a wonderful time in Portland but it was still a pleasure to leave the hustle and bustle of the big, noisy city and head south on I-5 and back into a natural setting at Champoeg State Park. Even the weather transitioned along with us, from hot and smokey to cool and rainy...fall is in the air!

We stayed at Champoeg last August and loved it so much we vowed to return. Many of the sites in the B-loop are large with excellent separation. Our site, B5, had privacy shrubs and backed up to a big grassy field, a little slice of heaven after the close quarters and nearly constant noise at Columbia River RV Park in Portland.

Champoeg State Park was the site of Oregon's first provincial government, formed by an historical vote in 1843. The park is situated on the banks of the Willamette River and has several miles of paved and natural trails plus a fun disc golf course.


From Champoeg we moved south and east about 25 miles to Silverton, OR. Set among rolling hills lush with filbert orchards, christmas tree farms, fields of blueberries and a variety of other crops, Silverton calls itself both Garden City and City of the Falls, thanks to the lovely Oregon Garden and nearby Silver Falls State Park. 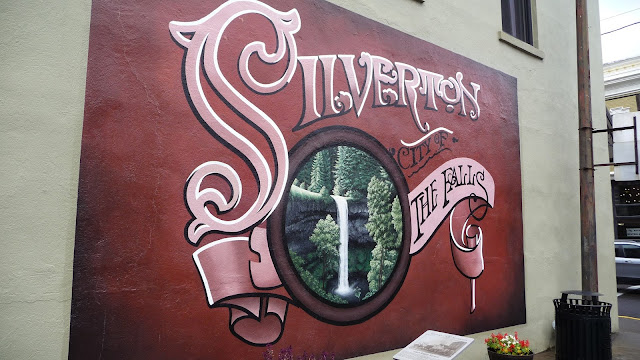 After a couple of days of rain our first outing was a walk in Willamette Mission State Park. Site of the first Methodist mission for Native Americans in the west (in 1834), the park has several miles of paved and natural trails, a disc golf course, historical sites and extensive picnic areas.


The paved trail led us to a view of the Wheatland Ferry. A ferry has operated at this location since 1844. Today's version can hold up to six cars and is tethered to keep it from floating down stream.


Gardens of all kinds make me enormously happy so high on my list during our stay in Silverton was a visit to The Oregon Garden. Originally conceived in the 1940's, the garden was finally realized in the late 1990's. This 80 acre property has over 20 specialty gardens depicting every type of habitat found in the Pacific Northwest. I enjoyed some alone time in this paradise and recommend it to anyone who gets excited about plants. 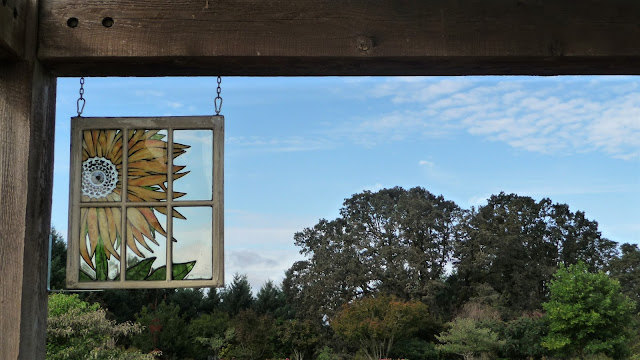 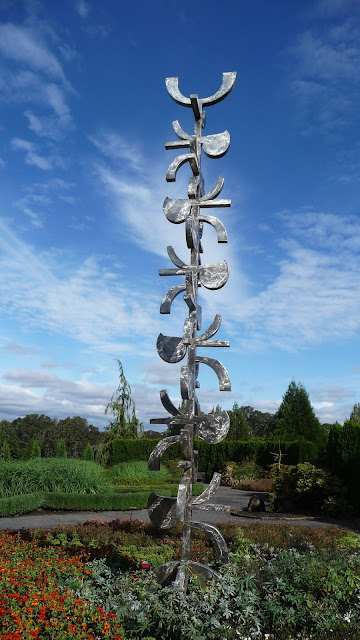 Silver Falls State Park is one of the crown jewels of the Oregon State Park System. It's so popular we weren't able to get a site at the campground which is why we ended up staying in Silverton, which is only about 15 miles away. We did drive through the campground though and thought it looked like a nice place to stay, there were several very long and private sites that we would enjoy.

The most popular hike is the Trail of Ten Falls. It's a loop, about eight miles long, and dogs are not allowed on this trail, though they are allowed on other trails in the park. We chose to hike the falls trail early on a week day hoping to miss the bulk of the crowds. We parked near the Silver Falls Lodge and hiked the loop counter clockwise, getting the two mile section next to the road over with first.


For our last hike in the area we returned to Silver Falls State Park and hiked the eight mile Buck Mountain Loop. The entire loop traverses dense forest, but as the trail gently climbs the forest opens up, and the peaceful green solitude was refreshing after the thick crowds on portions of the falls trail. 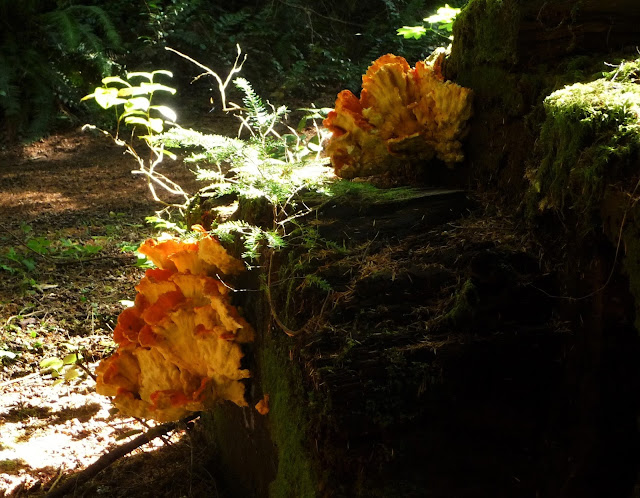 That wraps up the last week and a half...onward to Eugene for a few days!

A Couple of Weeks in Portland

I don't have a lot to show from our two weeks in Portland. Sure, my camera had an issue and had to be sent back for warranty repair, and I really don't like taking photos with my cell phone. But the reality is I just wanted to enjoy our stay without the pressure of blogging hanging over my head. We're now five years into our life on the road and I find it harder and harder to blog about places we've visited multiple times.

But that doesn't mean we didn't have fun! We met up with local friends: Bob (college buddy and former band mate of Hans) and John and Kym and their sweet daughter Simone. RVing friend Susan from San Antonio was in town visiting family so she joined us for lunch with Linda (blogging and hiking friend we met up with in Astoria). Thanks to the blog we also made some new friends in our RV park and had a nice dinner out with them (Hi Julie and Casey!).

Our stay was plagued by heat the first several days followed by smoke from the awful fires ravaging the Columbia Gorge off and on for the rest of our stay. We were grateful we hiked Eagle Creek last year with Linda, it's going to take decades for parts of the Gorge to recover from the fires.

Fortunately there are miles of forested trails in the hills throughout Portland. On our very first hike we had an amazing animal encounter. While walking through Hoyt Arbortem I saw something large and gray fly past through the trees. Rounding a corner we came upon a barred owl eating a small snake! This beautiful creature was so engrossed in its meal Hans was able to get about ten feet from it to take a photo.

Columbia River RV Park is pretty well located for getting around Portland, but any time you want to go downtown parking can be awful, so this time we took a cue from fellow RVers Jim and Gayle and drove to the nearby Expo Center where we hopped on the MAX light rail system to downtown. Portland Spirit Cruises offers a variety of river cruises on both the Willamette and Columbia Rivers, we chose the Thursday Early Escape cruise on the Willamette, it's an afternoon ride with a live band...great fun with beautiful scenery!


Former San Diego friends Chuck and Cynthia had recently moved to Chehalis, WA, an easy drive from Portland. We took advantage of the excellent weekend car rental deal offered by Enterprise ($10/day and 100 miles/day for a 3-day weekend after Labor Day) to visit them. Hans was all excited when we arrived at the rental office and they had run out of compact cars...for the ridiculously low price noted above we got to drive a 2018 Jeep Grand Cherokee with only 13 miles on it!


We had a grand time visiting Chuck and Cynthia, seeing their new home, eating a delicious Indian buffet lunch at Great Cuisine of India and walking cute downtown Centralia.

There were plenty more fun experiences in Portland; excellent Vietnamese happy hour at Luc Lac, an incredible hamburger at Ecliptic Brewing, delicious tiki drinks for Bob's birthday at The Alibi, a wonderful hike at Powell Butte Nature Park (thanks Allison for bringing this place to our attention)...but no photographic evidence exists...just good memories of a city we enjoy every single time we visit!

Wrapping up Seven Weeks on the Oregon Coast

The final stop of our summer on the Oregon coast was at Fort Stevens State Park, which occupies the north west corner of Oregon. The fort was active for 84 years, from the Civil War to World War II, and its military history is visible at sites throughout the 4,300 acre park. Nine miles of paved bicycle trails and six miles of hiking trails allow for extensive exploration of this beautiful setting bordered by the Pacific Ocean and the western terminus of the Columbia River.

The state park has about 500 camp sites which are spread out among 13 loops, making the large number of campers seem not so oppressive. Of the three state parks we stayed at along the coast, our site here was the least pleasant...the water pressure was terrible and the site wide open to the road with no privacy whatsoever. But, thankfully, we once again had a hidden trail into the forest right behind the rig allowing us to escape the fishbowl feeling and walk Rosie in a serene, inviting, safe space.

Despite the fact that our campsite was less than perfect, we still loved this park! We spent a single night here three years ago and vowed to come back. The extensive trail network is exceptionally beautiful and lightly traveled, the history is fascinating, and the lovely town of Astoria is just a few miles away.

Before we could explore Fort Stevens in depth we had a meetup planned with Linda, a hiking buddy and wonderful photographer from Portland whom we've met up with on a previous trip to the area. She was gracious enough to drive out to the coast to join us on a hike followed by lunch.

Linda suggested a hike she'd been wanting to do for some time and meeting us allowed the three of us to do a shuttle hike. The Fort to Sea Trail is a 6.5 mile (one way) trail from Fort Clatsop National Memorial to the ocean. Fort Clatsop was Lewis and Clark's winter encampment from December 1805 to March 1806 and this trail is a route they used to explore the area between the fort and the sea.

We hiked through a variety of terrain, from rain forest to farmers fields to dune forest to the ocean.


The rest of our stay at Fort Stevens was spent hiking and biking the various trails in the park. The terrain includes a lake, lush forests, marshlands, dune forests and grasses, defunct military installations and the ocean with a shipwreck...it's a wonderful park!

So ends a glorious seven weeks on the Oregon Coast. We are now in Portland under orange lit smokey skies and approaching 100 degrees...we miss the coast already!