St George RV Resort is actually in Hurricane, UT, near Quail Creek Lake. It is part of the Encore/Thousand Trails group...but calling it a "resort" seems a little far fetched. Gravel/dirt roads and sites, rather close together, plenty of sites have some slope, and things look at little ragged around the edges...it just doesn't seem to embody the term "resort". That said, I'm not so sure I'd really want to stay in a park that was perfectly manicured with everything "just so" and rules governing every little thing you do!

We chose this park because it was centrally located in the Hurricane/Zion/Virgin area where we have a lot of hiking and biking to do. They also had a $99/week special going on, plus $3/day resort fee (for any stay less than 30 days). They also charge an extra $2/day for wifi & cable...first time we've come across that, and we decided to pass figuring our service would work better anyhow, as it has so far. AND, they wanted an extra $3/day for 50amp electrical! We passed on that as well, knowing we could handle 30amp...we wouldn't be needing our A/C at this time of year.

Turns out the mountains surrounding the park make for very poor Verizon service! Calls were dropping and the internet was virtually stopped, even though our Millenicom booster should have helped our internet service. The day we arrived we ended up buying and installing a Wilson RV/Trucker antenna which gave us excellent 4G service when Hans mounted it near the top of our ladder. Still, internet service was sometimes slow, probably due to the surrounding hills.

There are 123 RV sites with full hook ups set up so you share utilities between two RV's. Sites are very close together and not really long enough for your truck or towed vehicle to be parked in line with your rig, so everyone is jockeying their vehicle for parking space, making things even tighter...you better be friendly with your neighbor!

We had a power outage the first night for at least an hour. This may have been the result of an accident the day before where someone ran into the laundry facility, effectively shutting down laundry for several days! We did end up using the laundry facility once fixed, and it was clean and reasonably priced.

There is a also a pool and hot tub and restroom and shower facilities (free). Nice view from the hot tub! Small playground, book exchange, game areas.

There is some freeway noise from I-15.

The best feature of this park was it's location, right across the freeway from Red Cliffs Recreation Area. Read my post here for some detail on this lovely park. We ended up spending time in two sections of Red Cliffs park on three different days. Excellent hiking and mountain biking.

Would we stay here again? Maybe. The price was certainly right at $99/week and the location very good, our various neighbors were friendly. There are a lot of options within 25 miles of here, so we just might seek out another location for variety the next time around.

Posted by Metamorphosis Lisa at 5:44 AM 4 comments:

Wrapping up the Hurricane, UT Area

We've spent a week at the St George RV Resort in Hurricane, UT and now it's time to boogie on down the road to Kanab, UT.

We ended up hiking and biking at the Red Cliffs park system on three different days. The variety of trails and gorgeous landscapes accessed from two different entrance areas within a couple miles of our campground was too hard to pass up...not to mention the lack of crowds!

Here's a few more pictures of the area; enjoy...we sure did! 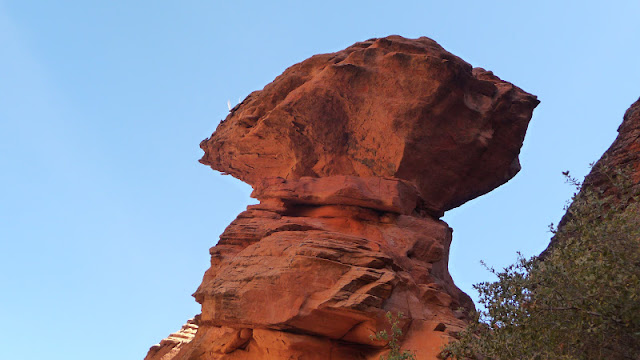 Red Cliffs has several different sections: the Recreation Area, the Desert Reserve and the Conservation Area. There are two entrances within a mile or so of each other. Both access points are through tunnels under interstate 15 that are 11'9" tall. Well worth seeking out this hidden gem!

We didn't know it when we booked a week at St George RV Resort, but the Red Cliffs Recreation Area is right across the road from our RV park. To access the park and the campground within it you must pass through two tunnels under I-15.

One of my favorite features of the Southern Utah landscape is the Navajo Sandstone layer. It is the largest layer visible to us and is actually petrified sand dunes. 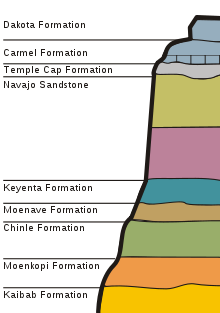 The rolling red and white stone that makes up the majority of the Red Cliffs is Navajo Sandstone. 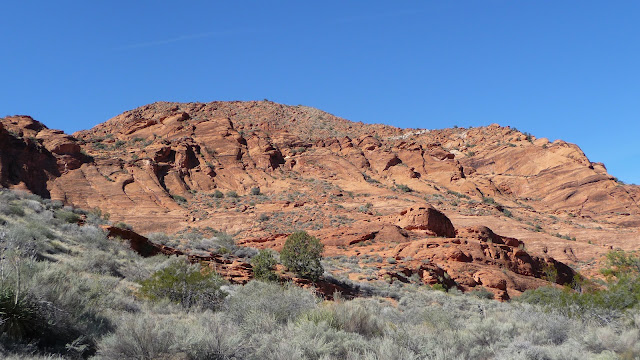 We hiked the Red Reef Trail which takes off from the campground, following Quail Creek into the red hills. 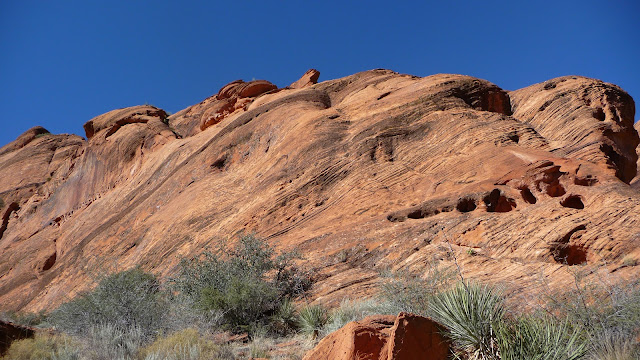 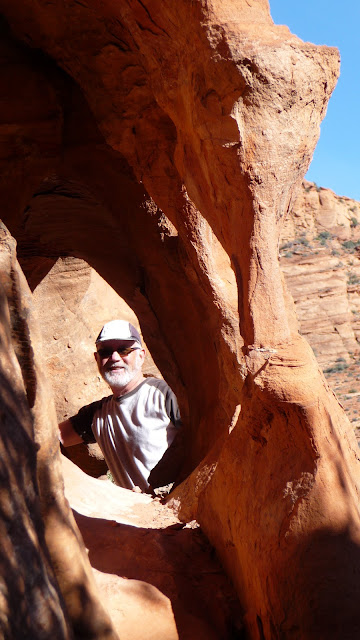 This was a hidden gem of a park. There are petrified dinosaur tracks (they didn't photograph well), Anasazi ruins, some Mormon pioneer history, and the remains of an old movie set ("They Came to Cordura"), and several more miles of trails to explore.

Boondocking tip! Just North of Red Cliffs Park, from the town of Leeds, cross under the freeway and head West on Silver Reef Rd. It will turn into Oak Grove Rd and head into the Dixie National Forest. There are some amazing dispersed camping sites in this area. You must camp in marked "dispersed camp" sites only and some of them (say the first 5 sites) look acceptable for big rigs. Beyond that the road is only passable by smaller rigs (think truck campers, trucks, vans). This is a well maintained gravel road that goes for many miles into the back country.


Posted by Metamorphosis Lisa at 6:46 AM 7 comments:

We've relocated to Hurricane, UT. It's a great central location for exploring Zion National Park and the many, many hiking and biking trails in Hurricane and St George area.

The main canyon of Zion National Park utilizes a shuttle system from April through October in order to control the chaos and possible destruction of natural resources that could otherwise result from the amount of visitors this popular National Park receives. We knew we'd be among crowds in the park, but were happy we'd arrived in fall, when the crowds would be fewer than in the summer months.

Shuttles run continuously and frequently all day long making it an easy system to use. We never had to wait more than 5 minutes for a shuttle.

We started off our day at the park by taking the shuttle all the way to the last stop: Temple of Sinawava. This stop has a short riverside trail that leads to the famous Narrows hike, where you can hike in the river into slot canyons...not on our list of things to do right now!


After the short warm up hike (it was 37 degrees at 9am in the canyon...we needed to warm up!) we hopped back on the shuttle and headed back to The Grotto stop.

Our chosen hike for the day, the Angels Landing hike, had been recommended to us by two different chance meetings with hikers over the past week. It was hailed as an amazing perspective on the canyon, challenging but worth it! We were told there are some sections with chain to hang on to near the top. We were forewarned!

Angel's Landing trail takes you to the top of one of the giants towering above us. According to the sign at the trail head, six people have fallen to their deaths since 2004. A rather ominous start.


The trail gains 1,488 feet in 2.4 miles over numerous switchbacks. The thing that surprised me most was the trail was paved most of the way! Surprising, but understandable due to the potential for erosion and the hoards of people that travel it each day...but kind of disappointing too. Kinda takes away from the whole nature thing that really appeals to me, though it certainly made the steeper sections easier.


The trail continues between two giant fingers for a good quarter mile, with the one on our right being our final destination: 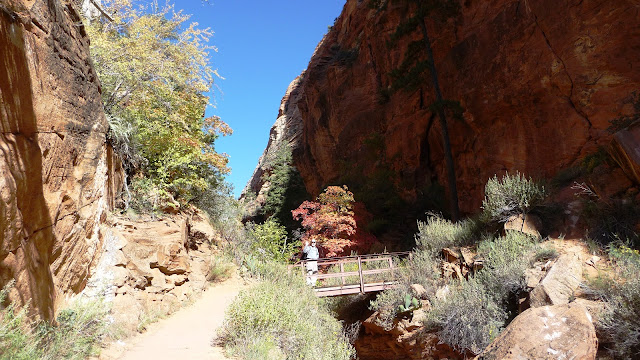 Arriving at the backside of the rock we were attempting to conquer, we discovered another set of switchbacks:


We arrived on a large boulder strewn plateau. The views into the valley below were stunning. Ahead of us we could see people crawling up the side of the next rock hanging on to chains:


We decided stop and catch our breath from the climb and eat lunch, fortifying ourselves for the craziness ahead. 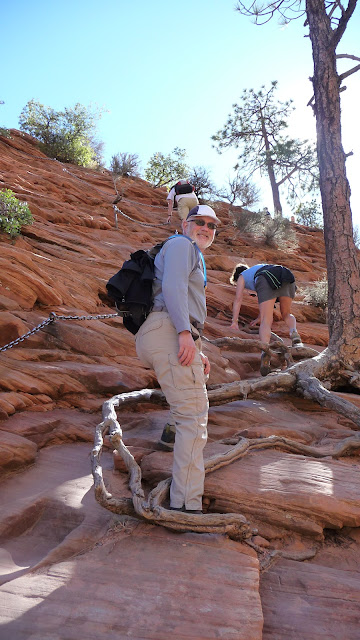 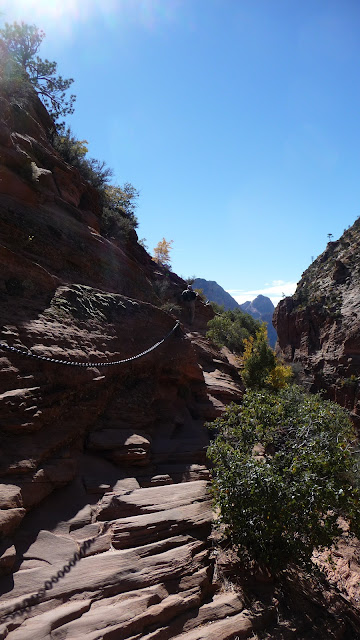 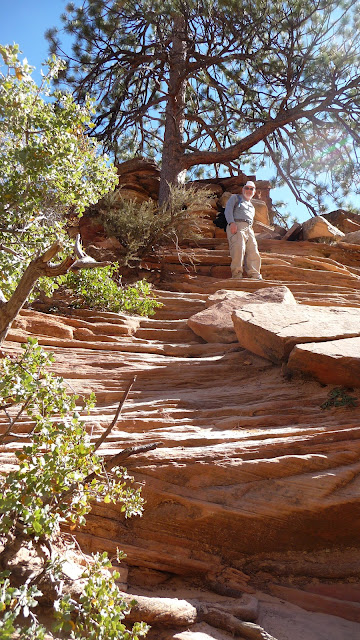 We'd made it to Angel's Landing...or so we thought!


Turns out, there was still almost half a mile to go:


Here you can see the hardy souls clambering up the side of the rock and walking on top of the world:


We decided the thrill of continuing was actually more akin to severe anxiety and decided we'd gone far enough! So we just enjoyed the view for a bit longer before attempting the return down the chains.


We made it back to the canyon floor (obviously!) and enjoyed a long walk along the river. Zion is a spectacular place and I'm very happy it has been protected by the park service; I'd love to see it when there are fewer people around...I'm spoiled by the equally picturesque non-park trails that can be found nearby. We'll be seeking some of those out in the days to come. 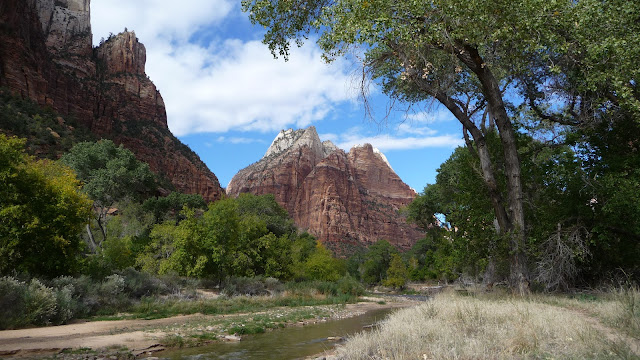 Posted by Metamorphosis Lisa at 10:28 AM 4 comments:

Just 15 miles South of Cedar City, UT is the tiny town of Kanarraville. Besides the Red Ledge RV Park there are virtually no services. No grocery store, no restaurants, no gas stations. But there are a couple of slot canyon hikes nearby and less than 10 miles to the Kolob Canyon entrance of Zion National Park.

Kanarraville sits 5 miles off of I-15 and it's lack of services means there is really only  local traffic going through "town"; thus it is very, very quiet at night.

Red Ledge doesn't have a website, they rely on their Passport America page and RV Park Reviews. The Park is small and the 22 sites are quite tight, especially the few pull through sites, because this park was built before slide-outs were common. Full hookups at each site, 30 amp electric. $26/night, $13/night for Passport America members after the first night.

The free wifi was extremely slow due to the remoteness of the town. Our 3G Millenicom service was slightly better. 3G Verizon service worked well.

The Park offers laundry (very inexpensive), showers/restrooms, hot tub (winterized while we were there) and a small store (inside the office) where they rent movies for $1, sell local free range eggs, and have a book exchange. Management was friendly and easy going.

As mentioned above, our site was extremely close to our neighbors, luckily both of us were quiet! Our neighbors site faced a lovely green space with picnic tables, but our site opened onto the next site over where we were able to park our truck.

The redeeming factors of this park are the QUIET, the proximity to hiking, and the pleasant management. Due to the windy weather during our stay we met very few of our neighbors. If we were to stay here again I probably would not request a pull through but would try for one of the few back in sites that could accommodate a large rig.


Posted by Metamorphosis Lisa at 5:35 AM 2 comments: