Bluff is a tiny south eastern Utah town in the San Juan River valley founded in 1880 by 70 Mormon families. These families had spent the previous winter making a harrowing 250 mile journey from Parowan, UT to the San Juan River valley, overcoming enormous obstacles in order to answer their calling. We learned their story, from their descendants, at the Bluff Fort Historic Site.

Hans and I first heard of Bluff from our friends John and Pam, who have visited twice and rave about the fascinating hiking among ancient ruins in this area. Before the Mormons arrived, the area was inhabited for hundreds of years by Native Americans and the remains of their home sites can be found in numerous canyons all across south eastern Utah.

We only had two nights in Bluff, but that gave us one full day to get a feel for the area and gain an appreciation for the endless opportunities for exploration around here. One can drive a lot of miles seeking ancient ruins in Utah but we chose to stick close to town and explored the Butler Wash area immediately east of Comb Ridge.

Comb Ridge is a huge monocline running 80 miles from Kayenta in northern AZ to the Abajo mountains near Blanding, UT. The west side of the Ridge is a sheer cliff but the east side is split by numerous box canyons, some with flowing springs...perfect habitat for ancient peoples to thrive.

Butler Wash road is a decent dirt road with a number of known Native American sites to explore, but you need details to find them...details such as exact mileage to the trail head. Once you arrive at that exact location there are no signs saying you've reached the location of a particular site, there might be a single fiberglass trail sign without any specific details. We used this link to find the three sites we visited, but a detailed book about the area would be much better.

We visited the Wolfman Petroglyph Panel, Monarch Cave Ruins and what we thought would be Split Level Ruins but turned out to be some other minor ruins. We learned that the canyons are full of dense foliage and long pants would be ideal for future explorations of the area, there can be lots of bushwacking! It is easy to see that we could pick a different canyon or two every day and work our way up Butler Wash Road...and that is just one small part of a huge area full of ancient ruins to find! 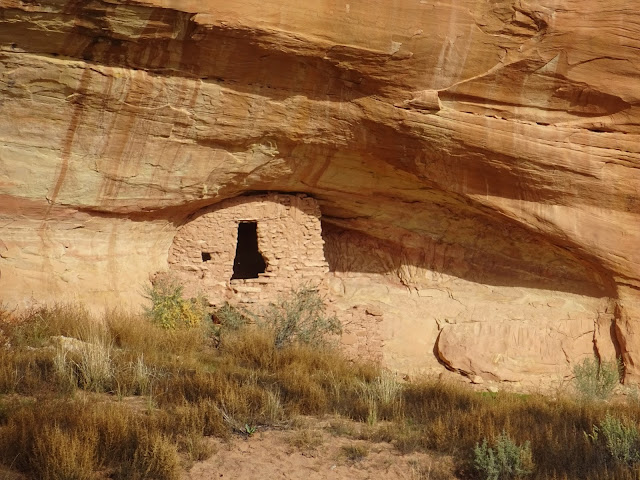 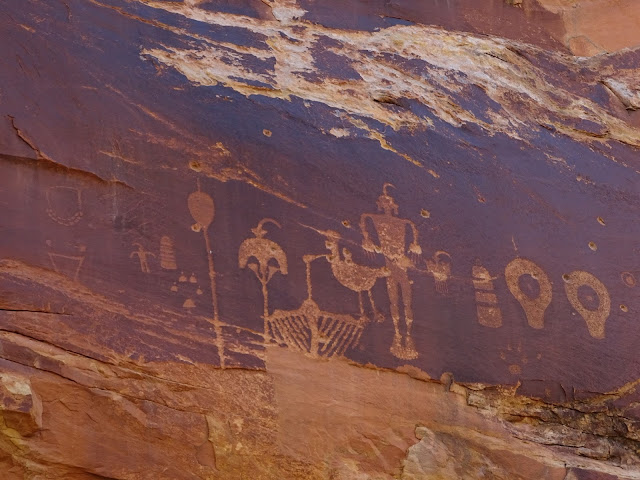 Moving on down the road we came to what we hoped was the Monarch Cave Ruins trail. We were happy to see a trail sign, even though it had no site information, and an actual trail. The foliage was dense as we made our way into the canyon. 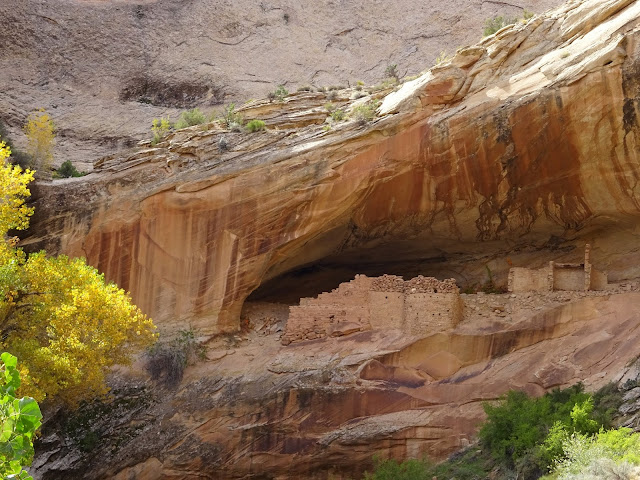 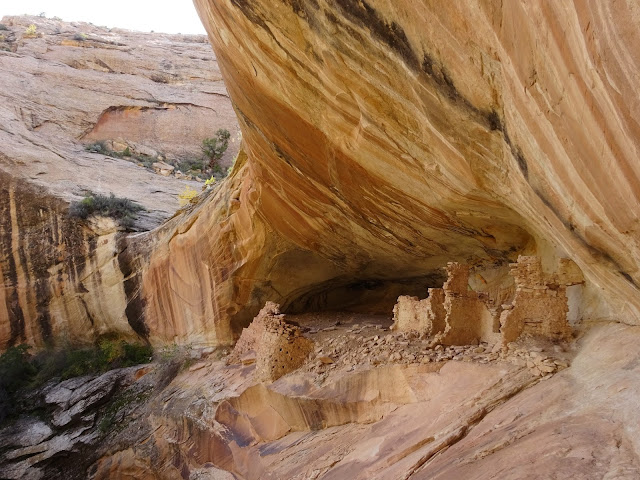 Next we drove to what we thought would be Split Level Ruins trail. We had a trail marker and a trail to follow, though it did not lead us to the expected ruins. Not a problem, the walk was beautiful and it was fun to explore a canyon not knowing what you might see around each turn! 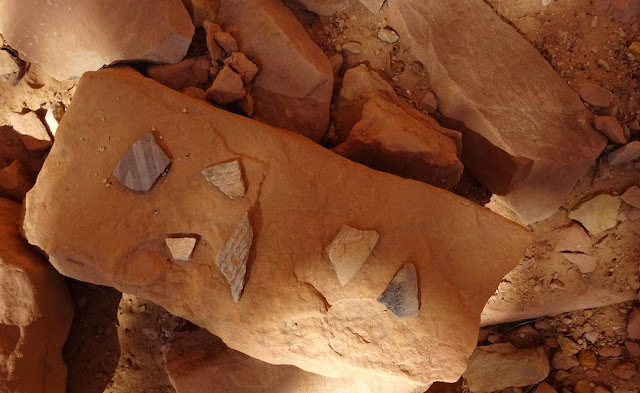 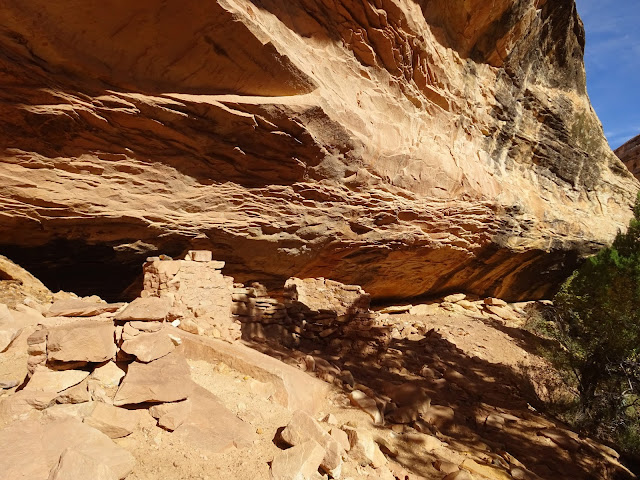 We stayed at Cottonwood RV Park in Bluff. It's a nice little park that was nearing the end of its season, with only a handful of sites taken. Full hookups and a picnic table at each site. We had okay 4G Verizon signal with our booster, the parks wifi was useless. 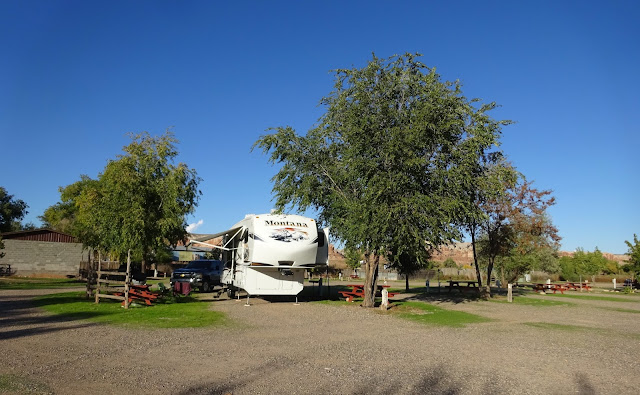 Much time can be spent in this corner of Utah searching for ruins among the dramatic landscapes. In the future we'd likely hop around to different areas such as Bluff and Blanding and Cortez, CO, spending a little time in each exploring. A high clearance or 4x4 vehicle is needed to really get into the back country around here.

Next up: a brief stopover in Flagstaff.
Posted by Metamorphosis Lisa at 6:49 AM 15 comments:

Other worldly, fantastical, mesmerizing...all of these words and more are apt in describing the landscape full of crazy shapes, bulbous mounds and colorful spires that make up the Needles District of Canyonlands National Park.

We first learned of the Chesler Park Loop from our hiking buddies John and Pam who hiked it this past spring and it immediately went on my "must hike" list. More recently several other blogger buddies have hiked it on a very warm day so our goal was to hit it under ideal conditions. By extending our stay in Moab by a few days we got through the heat and then the rain and ended up with a perfect day for our hike.

Chesler Park Loop is an 11 mile romp through all manner of fantastic rock formations interspersed with short strolls through grasslands with views around every corner to make you swoon! This was one of those days when the grins were nonstop as we scrambled over and through all sorts of fun obstacles and were wowed with amazing near and far views! 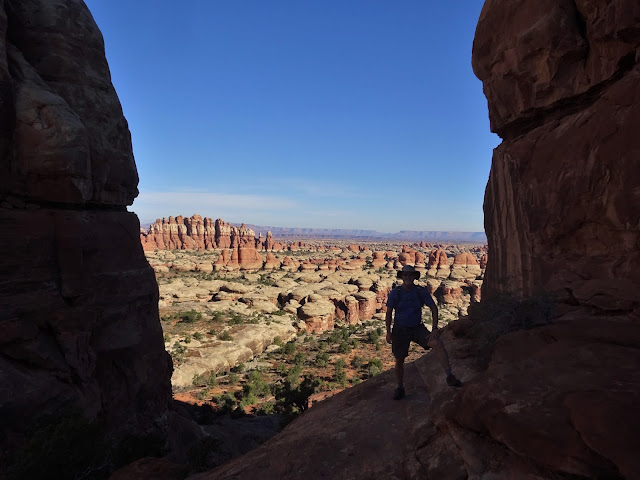 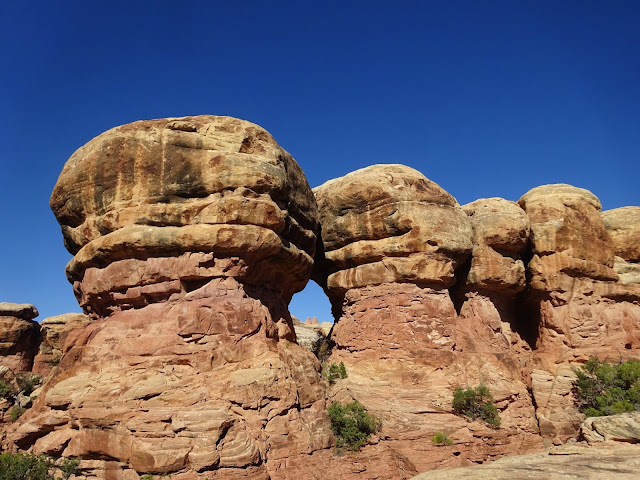 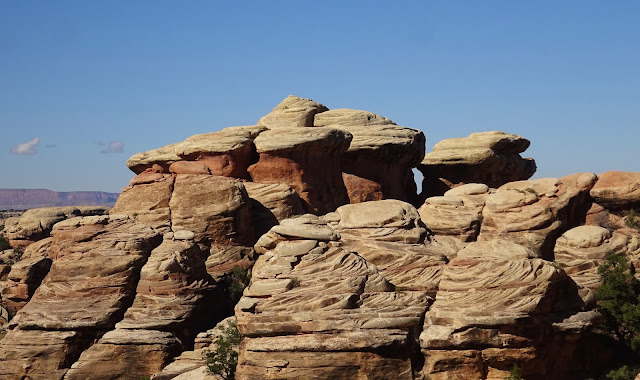 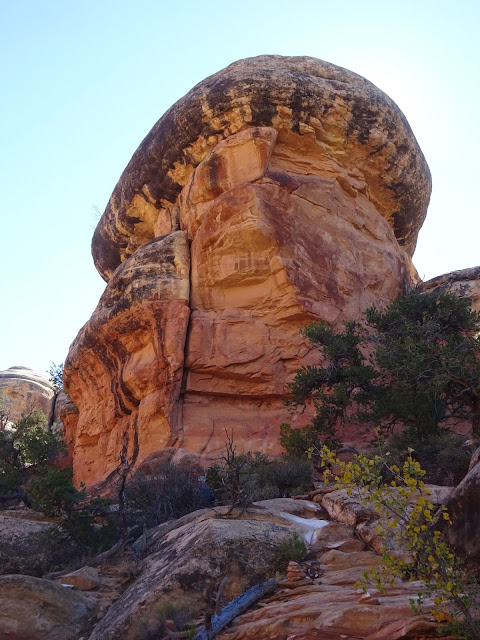 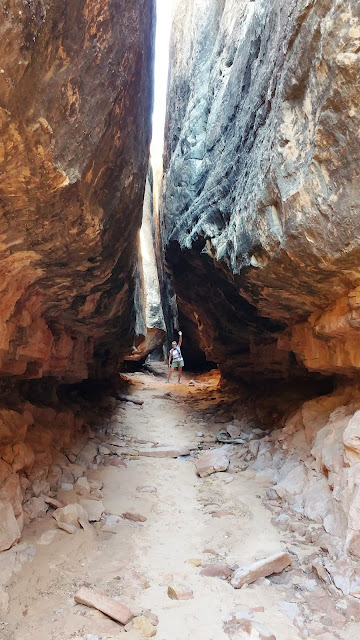 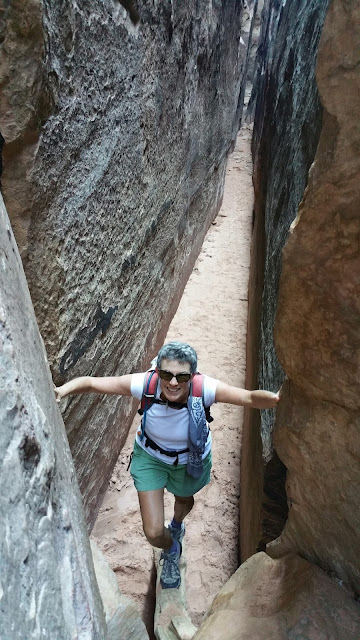 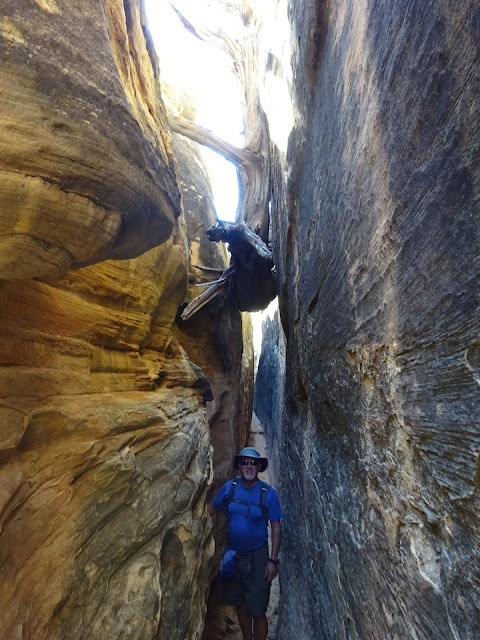 One of the things we appreciated about this hike is that even though it was long at 11 miles, the variety of ups and downs throughout the trail left us feeling more invigorated than worn out by the time we were done. And, the incredible variety of scenery cannot be beat!

Next time we are in the area we will look more closely at dry camping options closer to Canyonlands. The drive in from Monticello (where we stayed) was quite long and precluded us from wanting to go back another day to experience more of this gorgeous National Park.

On the drive back to Monticello we noticed lots of cars parked along the highway on this beautiful Saturday. At first we thought people were hiking the offshoot canyons looking for ancient ruins and rock art...it turns out this is a popular place for rock climbing!

One more thing...the day before we hiked Chesler Park we checked out the Shay Canyon petroglyphs. There are a number of easily accessible panels just off the highway on the way to Canyonlands.


If you love hiking in unique landscapes, put the Needles District of Canyonlands National Park on your list!

Posted by Metamorphosis Lisa at 5:51 AM 16 comments: