Excellent Boondocking on the Green River

Since leaving Grand Lake, CO we've entered Wyoming and have traveled through a lot of wide open space and rolling sage brush covered land. The first day, right as we entered Wyoming, the skies opened above us in a brief but torrential downpour, complete with some big scary lightening.

We spent the first night in unremarkable Rawlins, WY, at a RV park near the freeway (ear plugs were our friend). In over ten months of full time RVing this was our first one night stand.

The redeeming factor for Rawlins was the lovely nine-hole disc golf course (complete with deer) that we played in the morning before hitting the road. The town was full of deer, probably because it was the only green area to be had for miles around.

The destination for our second night in Wyoming was the Warren Bridge BLM site along the Green River, 20 miles North of Pinedale, WY. We had learned about this boondocking site from Deas and Jen...Thanks so much for a most excellent recommendation! Another first was in store for us...after ten months on the road we had yet to boondock in our Montana 5th wheel. 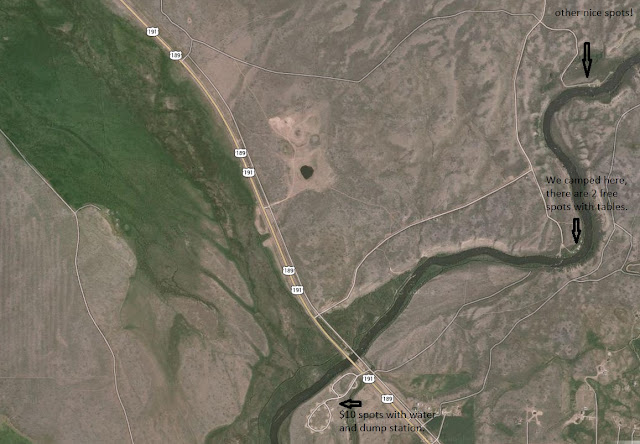 After being spoiled by the green of Colorado for over two months, Wyoming, so far, had been a lot of brown. The Green River valley was a lovely sight for sore eyes. Warren Bridge BLM has two separate camping areas. On the West side of Hwy 191 is a developed dry camping area with picnic tables, BBQ pits, pit toilets, water and a dump station for $10/night. On the East side of the highway are 12 separate riverside camp sites, spread out along nine miles of the river, with picnic tables, BBQ pits and pit toilets (well away from the camp sites), for free.

We arrived on a Tuesday afternoon and discovered the two free sites in Area 1 were empty. We took one of them and had the entire area to ourselves for our one night stay. Area 1 is a very level grassy area. We hiked down to Area 2 and noticed those grassy sites were quite bumpy and would have been a bit of work to get level.

There is a good dirt access road through the BLM area and side roads drop down to each camping Area. Some of the camp sites have a boat launch site...though the water was too low (in my opinion) to put a boat in. We did not check out the sites beyond Area 2, so we cannot vouch for their accessibility.

We had decent 3G Verizon signal at our site using our booster. Without the booster we might have been in a black hole.

This was a fantastic boondockimg site, all three of us loved it! We absolutely would return here. 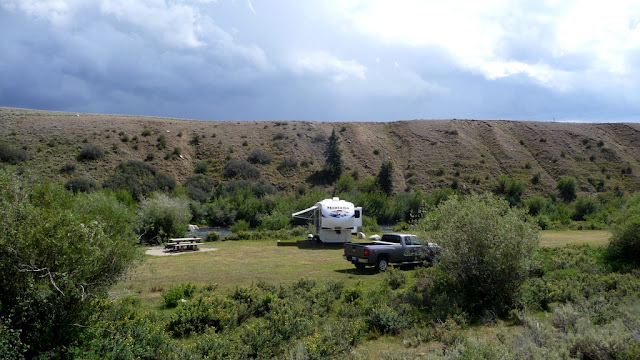 Elk Creek Campground and RV Resort seems more like a state park campground than your typical private RV park. Located about one mile from the quaint town of Grand Lake, CO and just outside the Western entrance to Rocky Mountain National Park, the park is situated among conifers and willow bushes with lots of grassy areas, a little creek and a small trout pond (which is no longer stocked, it was attracting bears!).

The park has 50 RV sites (some with full hook ups, some water and electric only), 13 tent sites and 14 cabins. All sites have decent separation, often with bushes between the sites and many have grassy open space as well. All sites have a picnic table and BBQ/fire pit.

We made reservations in February for two weeks. I believe the early reservations (and longer stay) are the reason we were assigned a large, well situated site. We were in site RV-19, which sits at the top of an oval ring of sites that back on to a lovely grassy and treed open space.

The thing about site RV-19 is it is a pull out site that you have to back in to and the utilities are separated with water and electric at one end and sewer at the other end. Fortunately the owners are aware of the problem and offered us an extra power supply cord so we could reach the electric pedestal. It took a lot of effort to get into this site, BUT it really is one of the best sites in the campground. The site is quite spacious and open with nice views of the open space and of mountains in the distance.

The site quality here varies greatly. Some sites have little to no sitting area (bushes and grasses are right up to the edge of the pad), some sites are very private with many bushes between them, some are open and grassy. If you make reservations you might want to discuss what type of site you want to have with the office.

BONUS: Moose are a common sight in the RV park during the summer! We saw them several times during our two week stay, munching on the willow plants.

Amenities include restrooms/showers, playground, game room, laundry and wifi. Using our Verizon wifi we had 3G with fair speed during most of our stay. The parks wifi was decent also, though it would occasionally disconnect you.

We stayed here during the middle of summer. The park was full each weekend and at least three quarters full on weekdays. This is typical in the summer at any RV park or campground in this area. There were a lot of families (lots of kids) camped here. We enjoyed our stay here...but, if we were to return, we might try staying just up the road at the Winding River RV Park...we spoke to another couple who felt the sites there were larger, more open and the park seemed to have fewer families.

Posted by Metamorphosis Lisa at 6:50 AM 3 comments:

We've had an amazing nine weeks traveling across Colorado. We spent quality time in 6 different sites (Mancos/Mesa Verde, Durango, Ouray, Gunnison, Buena Vista and Grand Lake); each was beautiful in its own way.

The state slogan, Colorful Colorado, is so appropriate; from the moment we crossed into Colorado we were entranced by the colors around us. Predominantly green, but so many shades and textures of green! Transposed against the brilliant blue sky and puffy white clouds, it's been a photographers dream. 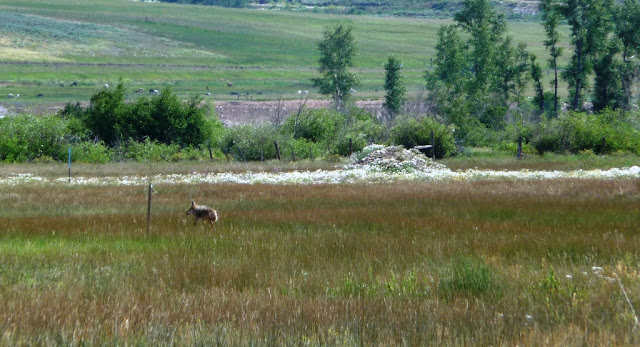 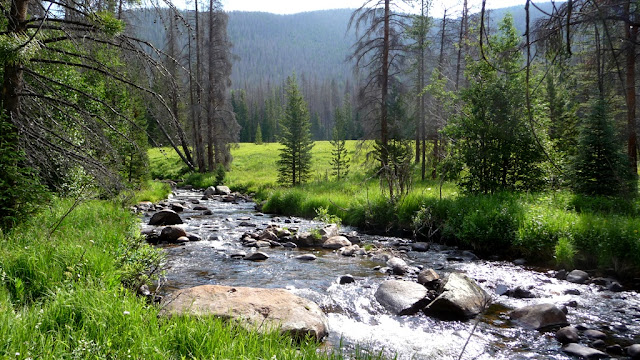 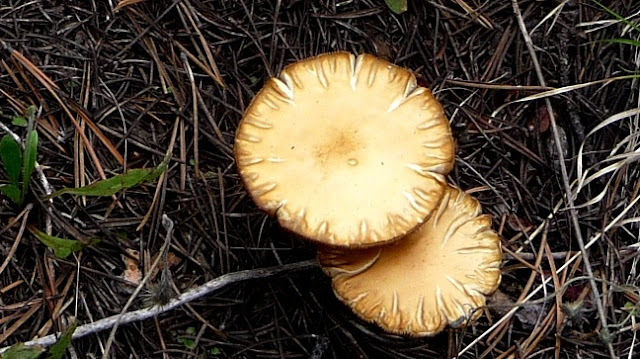 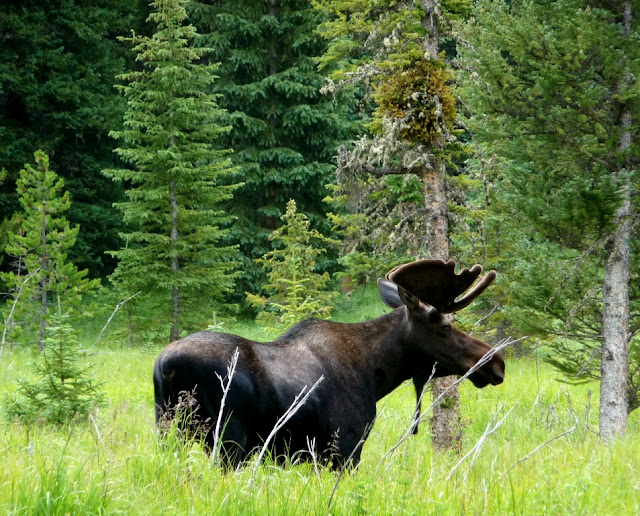 One more thing...here's the recipe for a delicious Corn Chowder we had the other day, enjoy!
Posted by Metamorphosis Lisa at 11:44 AM 7 comments:

If you've got the time and the stamina for an 11 mile hike, the East Inlet Trail to Lone Pine Lake is a wonderful way to spend a day. Starting at the Eastern edge of Grand Lake, CO, the trail heads up a beautiful glacially cut valley, alongside gorgeous meadows, between towering, boulder spiked mountainsides, through lush, cooling forest and intermittently meanders along East Inlet creek which alternates between clear and serene or roaring over rocky rapids.

The trail head sits at just about 8400 ft elevation and gains almost 1500 feet over 5.5 miles. There are numerous sets of stone stairs to climb over the course of the trail. The views are incredible and several folks we met on the trail had seen moose (even right on the trial!), though we did not. Fishing on East Inlet Creek in the meadow looks wonderful and we saw many trout in Lone Pine Lake. 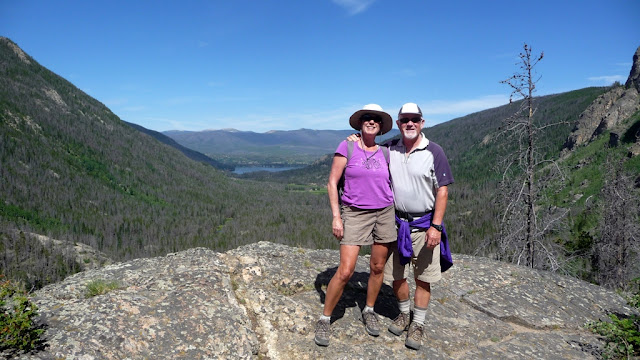 Posted by Metamorphosis Lisa at 6:31 AM 5 comments:

Exploring the Alpine Side of Rocky Mountain National Park

In the past week we'd experienced some heavy afternoon thunder storms, especially in the local mountains. Knowing we wanted to hike on the alpine tundra, we picked a day with no rain in the forecast to drive Trail Ridge Road through Rocky Mountain National Park (RMNP) from Grand Lake (where we are staying) to Estes Park, and back.

We were hopeful that making the drive on a Monday would have fewer crowds...but that was not to be. Mid summer, on a beautiful day, and the crowds later in the afternoon seemed as bad as any weekend. We got a fairly early start (8:15am) on the day, so the trail was not too busy when we arrived at about 9:30am.

We chose to hike the Ute Trail at Ute Crossing. The trail sits right about treeline, 11,400 ft, and stays around that elevation for about two miles, offering incredible views of the surrounding mountains, before dropping steeply down to Beaver Meadows on the Estes Park side of RMNP. We just hiked the upper level, enjoying this amazing, unique terrain and several animal sightings too.

First though, the day started off with another moose sighting in the RV park! We've noticed that they are more likely to enter the RV park on the quieter week days...

At a stop on the way to the trail head we saw our first group of bull elk: 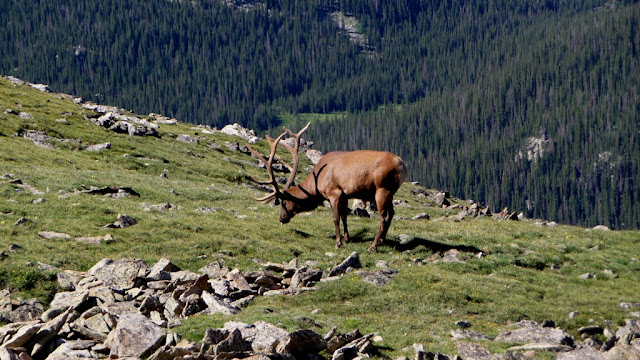 At the trail head we struck off across open tundra. The tundra here was different than tundra we have recently hiked near Ouray; it was drier and supported fewer and much smaller flowers. It reminded us of tundra we have hiked near Ustaoset, Norway: low, windswept mosses and grasses among small boulders...though this was much drier than Norway. 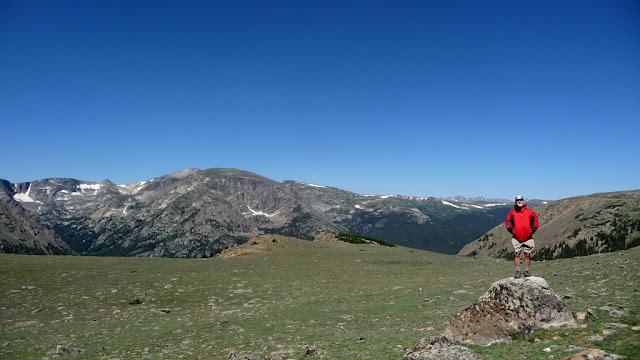 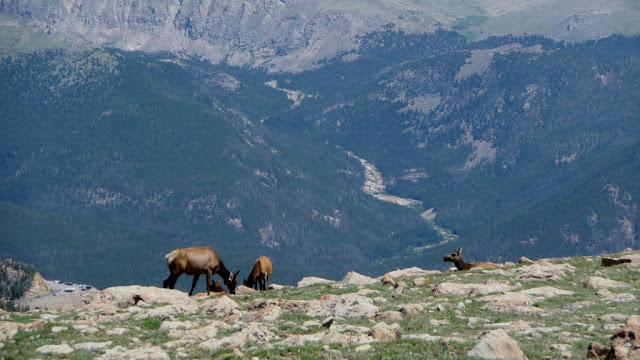 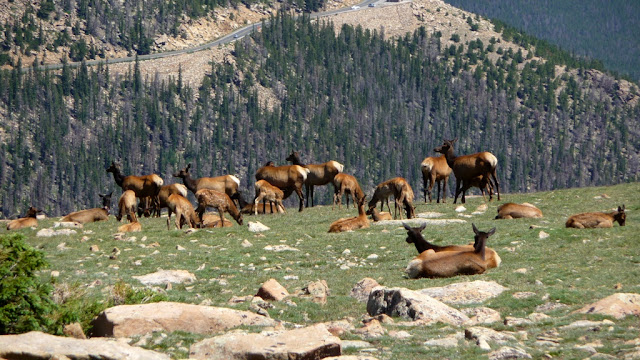 After this wonderful hike we continued our drive through the park. At this point we had reached the East side of the park, closer to Estes Park and much closer to major metropolitan areas of Colorado, and the traffic and number of people exploded! As we drove through Estes Park, headed for a grocery store, we were amazed at how congested the area was compared to Grand Lake, CO where we are staying. We were extremely happy we had chosen to stay on the West side of the park, away from this madness!

Following the necessary grocery stop, we took the one-way, dirt Old Fall River Road back to the West side of the park. This road comes out at the Alpine Visitor Center at the top of the park. It was shorter than driving back the way we had come, but was also rather frustrating. It's a good dirt road so many, many people take it, and some are driving 5 - 10 mph, with very few turnouts or places to park. If you drive this road make sure you are feeling patient!

We really enjoyed the hike on the tundra and seeing lots of elk during our drive and hike in RMNP. The summertime crowds in the park in the afternoon are extreme, and this was on a Monday. Get an early start to a day in the park and you won't be disappointed!

Posted by Metamorphosis Lisa at 6:18 AM 2 comments: