After leaving Torrey, UT just ahead of possible snow, we spent a couple of nights in Delta, UT, a small ranching town in a big open valley, where we hunkered down through some heavy winds and light rain.

Then we were off to Baker, NV, gateway to Great Basin National Park for three nights. Great Basin has been on our radar ever since we met Mike and Keyna in October 2012, started following their blog and read about their wonderful hikes that fall at this lightly visited National Park.

Baker, NV lies just off Nevada highway 50, dubbed the loneliest highway in America, and a handful of miles from Great Basin. The town is tiny, just 68 residents, and pretty ramshackle looking. Apparently business starts picking up in this seasonal town between Memorial Day and Labor Day.

The place we stayed, Whispering Elms Motel and RV Park, was as rustic and unkempt as the town, but very peaceful at this time of year, with only the sound of birds chirping to cut the quiet. It's also the only full hookup game in town, but boasts a bar with some decent brews on tap. The Ruby Mountain IPA from Wells, NV was delicious.

Great Basin National Park is so far off the beaten path that it receives less than 100,000 visitors each year, making it an exceptionally pleasant park to explore! There are several beautiful dry campgrounds in the Park for a small nightly fee.

There is no entrance fee to the Park, but a highlight of the Park is a tour of Lehman Cave, which does have an entrance fee ($10/per adult, no America the Beautiful pass discount). We took the 90 minute Grand Palace tour and felt it was worth every penny.

There are 45 known limestone caves in Great Basin NP, Lehman Cave is the only one with tours, and others, if you happen to see them while exploring the park, may be closed during bat breeding season. 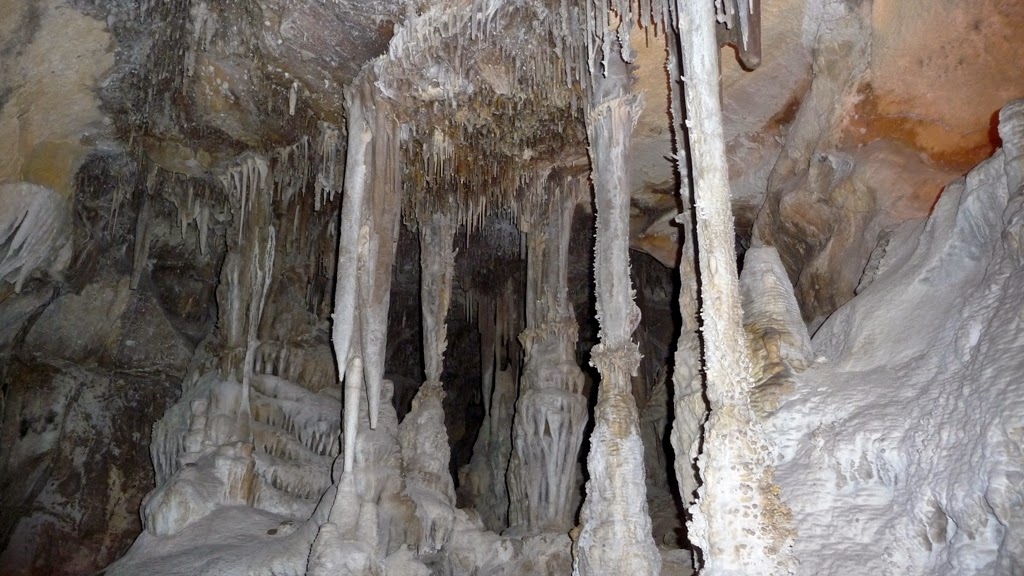 The Park is situated in the Snake Range which includes the highest peak fully in Nevada, Wheeler Peak at 13,063 feet. We considered hiking the 9 mile round trip trail to the summit, but we discovered the road was not open all the way to the trail head (at 10,000 feet) this early in the season.

Since a 13,000 foot hike would have kicked our butts it was just as well the road was closed! For our first hike we chose the lovely South Fork Baker Creek trail which starts at 8,000 feet and goes to 9,680 feet. We were certainly huffing and puffing as we headed up the trail enjoying the gorgeous spring scene all around us, but after a couple of miles (probably around 9,000 feet) the snow was too deep to continue.

The next day we took Wheeler Peak Scenic Drive to Mather Overlook, currently the furthest point you can drive, seasonal closure was still in effect beyond this point. Here, we got an incredible view of Jeff Davis and Wheeler Peaks.

We headed back down the road to the Lehman Creek trail head anticipating a seven mile RT hike with a 2,000 foot elevation gain. Though the trail follows the creek, most of the time we were only in earshot of it and I was a bit disappointed in the scenery compared to our hike the day before. After 2.3 miles we reached a pretty sage covered meadow with an excellent view of the peaks. After eating our lunch and enjoying the peaceful beauty of the meadow we decided to turn back and call it a day.


Great Basin was a gorgeous stop for us and wonderful change of scenery too after being in desert climates since January. We'd like to visit again, perhaps in the fall, so we can hike more of the high elevation trails. Baker, NV, though tiny and kind of decrepit, was a very calm and peaceful place to stay at this time of year.

Today we're off to Ely, NV for a couple of nights, slowly making our way to Carson City where we'll the truck fixed from our little mishap in Escalante...

Posted by Metamorphosis Lisa at 6:46 AM