Sierra Nevada Pale Ale has long been a go-to favorite for Hans so it was only logical for us to route through Chico, CA on our way to the east side of the Sierra Nevada range. We arrived to Almond Tree RV Park in Chico at noon with plenty of time to set up camp and relax at bit before our 3pm tour of the brewery. The tours are popular so reservations are a good idea.

Sierra Nevada Brewing is the third largest craft brewer and seventh largest brewing company in the US. Solely owned by one person, Ken Grossman, the plant is a model of sustainability and was named Green Business of the Year by the EPA in 2010. They have the largest privately owned solar array in the country, and they are installing several Tesla batteries to harness the energy produced during down times (the weekends) for use during the week.

We've been on numerous brewery tours and the brewing process is similar at every company, so the interesting part of the tour for us is to learn the history of the company and enjoy the free tastings. The brewery was founded in 1979, long before the craft beer phenomenon took off, and had a lot of growing pains along the way, including the bargain purchase of a 100 barrel brewhouse from Germany that cost 10 times more to ship to the US putting the fledgling company into serious debt.

This was a great tour, with a healthy amount of free tastings included. We started off with a sample of the flagship Sierra Nevada Pale Ale and ended the tour with tastes of seven additional brews. Afterwards we had a tasty pizza and salad at the onsite restaurant which had an extensive tap list with many that are available nowhere else including the one we shared, Ezo IPA, brewed with Asian hops with flavors of coconut, lime and lemongrass.


Bidwell Park is the crown jewel of Chico. Established in 1905, it is currently more than 3,600 acres, over 11 miles long, and is the 25th largest city park in the US. Lower Bidwell Park is in the heart of the city and includes miles of paved trail and green parks and playgrounds. Big Chico Creek connects Lower to Upper Bidwell Park which has a golf course and disc golf course, swimming holes and many miles of gravel and natural trails on multiple levels up a canyon NE of town.

Chico is situated in the fertile Sacramento River Valley, nestled against the foothills of the Cascade range to the north and the Sierra Nevada range to the south. Upper Bidwell Park follows a canyon formed by millions of years of volcanic activity and Big Chico Creek cuts through the Lovejoy Basalt flow which originated from a volcano near what is now Susanville, about 100 miles NW of Chico.

We hiked an awesome 9 mile loop in Upper Bidwell that featured fantastic views into Big Chico Canyon from the north rim plus incredible close up views of the Lovejoy Basalt flow and Big Chico Creek. The sparsely treed gray pine and oak savannahs we walked through were an interesting change from our deep green summer in Oregon and we read that the wildflower displays in the spring are not to be missed. 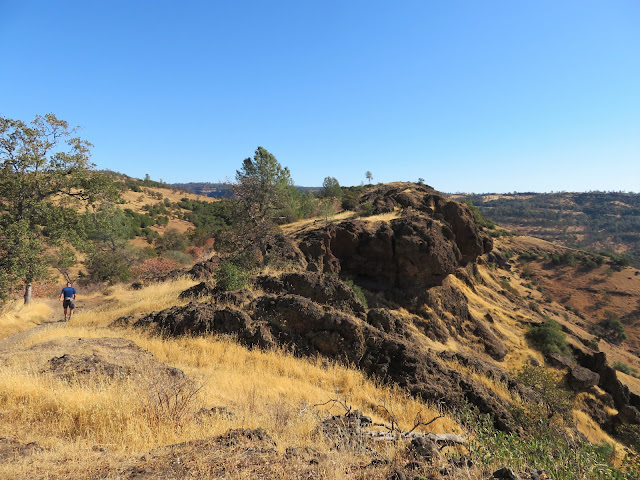 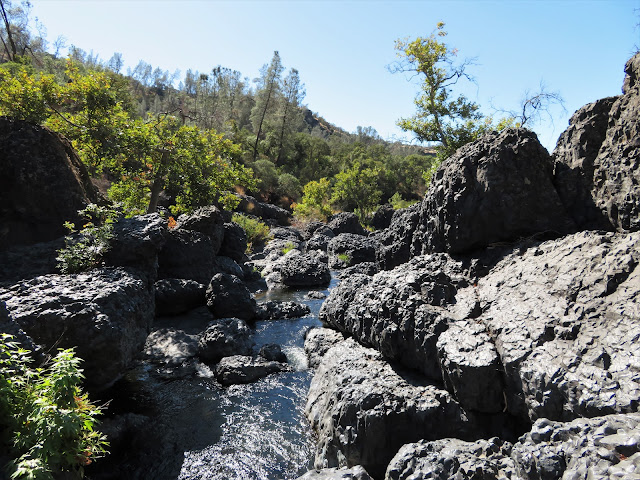 The next day we drove up the south side of Bidwell Park to Peregrine Point Disc Golf Course. The course plays across a mesa overlooking Big Chico Canyon, with some tees and holes very close to the canyon rim...I skipped a few holes because with my erratic throws it's quite easy for me to lose a disc in this kind of terrain!


Chico turned out to be a fun stop. Along with the adventures described above, we enjoyed walking CSU Chico campus and the adjacent vibrant downtown area. Lower Bidwell Park was also a pretty place to walk, the paved trail is shady and inviting with a variety of massive old trees.

From here we moved east into the mountains and California's gold country...and a fire zone!

Posted by Metamorphosis Lisa at 4:49 PM