We've had more time to explore, now that most of the initial set up of the RV is done. Here's a sampling of Boise so far...

On Sunday we hiked Table Rock, a small mountain (3,652 ft) adjacent to downtown, affording expansive views of the entire valley. (San Diegans would consider this the Cowles Mountain of Boise; an excellent, close-by way to get some good exercise.) Smoke from local fires was inundating the valley so the views were not the greatest but we enjoyed the hike and views nonetheless.

Part of the hike passes the Table Rock Quarry which was originally started at the turn of the 20th century and looks as though it is still active today, harvesting some beautiful sandstone.

Directly below Table Rock sits the Old Idaho Penitentiary. Active from 1872 - 1973, it is now a historical site and some of the buildings are open to visitors.

I've got a long ways to go before I could be considered anywhere near proficient at disc golf, but with settings like we've experienced lately, and very few people during the week, and free, I am really enjoying this game.

Last Saturday we biked the Greenbelt South from our campground. Today, we decided to bike it North. It was 18 miles of more wonderful Greenbelt trail.

The West path ran between the river and lovely neighborhoods with beautiful gardens backing right up to the path and later a quarry with its reservoirs full of birds, including some swans. The West side dead ended and we backtracked to the start and over to the East side. Here, we rode through pretty neighborhoods and then onto singletrack through dense river foliage, opening here and there to views of the river. 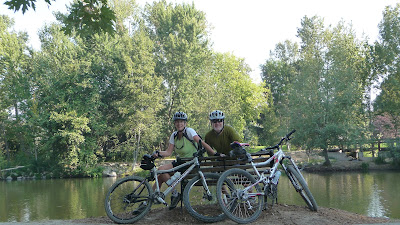 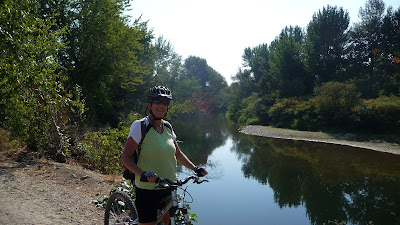 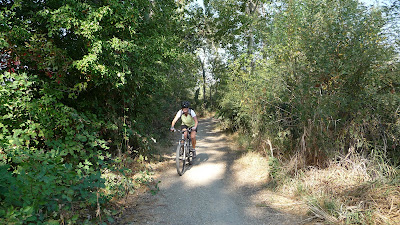 An interesting thing about many of the neighborhoods we've driven or rode through: they incorporate water. Not only does the Boise River run right through the middle of the city, but there are canals and streams all over the city, and many communities are built with the canals as landscape focal points that often open into small ponds or lakes. Manmade, yes, but surprisingly scenic and soothing...especially in such a hot, dry climate.

This afternoon we are having Dish TV installed and doing laundry. Life is grand!
Posted by Metamorphosis Lisa at 3:59 PM