A Couple of Hikes Near Durango

We knew when we arrived in Durango that our RVing buddies John and Pam would be at the same RV park for a couple of days. We immediately took up where we left off in Tucson and went on a hike.

We decided to do a small section of the Colorado Trail, which runs almost 500 miles between Denver and Durango. The Western trail head, in Durango, runs along Junction Creek for about 2.5 miles before heading fairly steeply uphill for another couple of miles. Our lunch stop and turn around point was Gudy's Rest, a lovely viewpoint named after Gudy Gaskill, the woman responsible for making the Colorado Trail a reality. We hiked about 9 miles round trip.

This trail is used by hikers and mountain bikers. At one point a mountain biker came sliding around a blind corner right at us and we almost had a terrible collision. Most of the trail does not have blind corners, but this is a trail where it's advisable for bikers to wear bells for the safety of everyone as the trail is very narrow with steep drop offs in many places.

The four of us ended the day celebrating my birthday at Steamworks Brewing Co in downtown Durango. Good burgers and good beer with excellent happy hour beer prices.

The next day Hans and I hiked the Goulding Trail. This trail is accessed about 17 miles North of Durango and is quite the leg burner! It starts out at about 7900 ft elevation and our turn around point at the Pinkerton-Flagstaff trail intersection was at about 10,000 ft. This was a six mile hike.

The first 1.5 miles are very steep uphill with about 30 switchbacks alternating between fir, ponderosa and aspen groves. Once you go through the cow gate the trail changes to a much gentler incline and takes you from short sections of dense forest to lovely open meadows lined with stands of aspen and fir.


I'd like to show you how steep the trail was but the lighting conditions were such a combination of harsh sun and dense shade that the photos did not turn out very well! So I'll move on to the pretty part of the hike...

Once we'd passed through the cow gate we made our way between two mountains and the air became cooler and breezier and green meadows opened up before us. 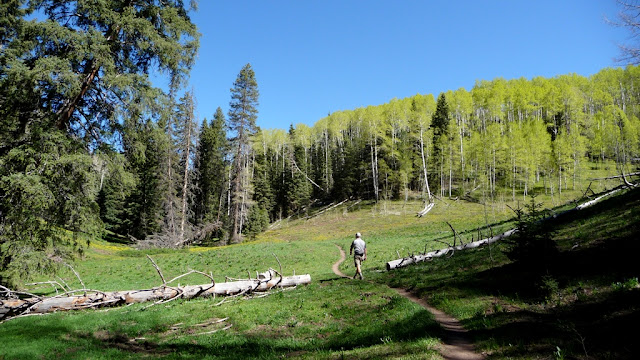 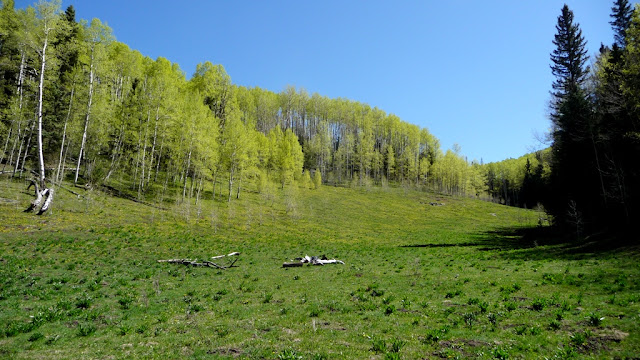 At one point I saw a gray canine heading into the trees and wondered if wolves lived in these mountains. We ran into 3 other people at this point, one was a local and she said she had heard there are no wolves...so I must have seen a coyote.

Near our turnaround point there is a cattle ranchers cabin and corral that made for some pretty photos. We also spotted some bear scat. The local said the folks who own this cabin always see bear when they come to the cabin this time of year and she had even seen a bear here before! We missed out this time but we all stuck together heading back down the hill for safety. 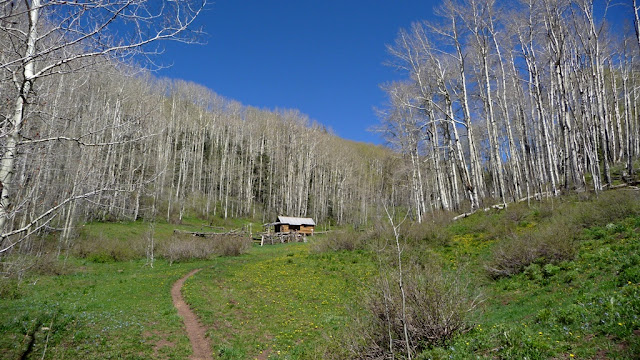 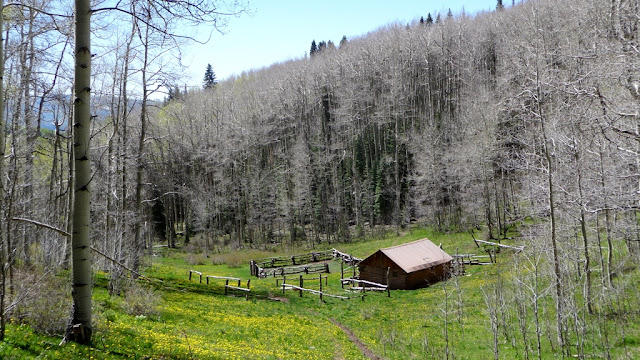 On our way home we stopped to inspect a strange sight which turned out to be a man made discharge site for the Pinkerton Hot Spring. 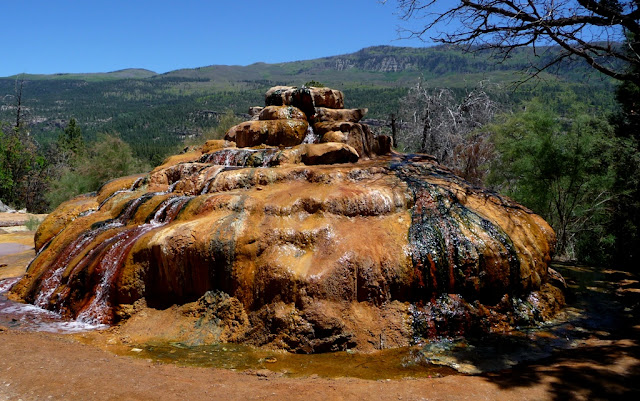 We finished out the day by having one last meal with John and Pam before they head East to meet up with their daughter. Serious Texas BBQ has two locations in Durango and the Southern location has a lovely outdoor patio overlooking the Animas River. The BBQ was delicious!

Posted by Metamorphosis Lisa at 6:51 AM