Safely Settled in the "Switzerland of America"

The shortest route between Durango and Ouray traverses the "Million Dollar Highway", a 25 mile stretch of steep and potentially hazardous road between Silverton and Ouray. The entire drive would go over several mountain passes over 10,000 feet so we knew we were in for a lot of climbing and descending.

Researching the drive we heard everything from "You're crazy to drive that with the trailer" to "It's not a big deal at all, especially going North". Hans was feeling confident, after all semi's drive it all the time, so drive it we did. And even though we were a little nervous (who wouldn't be with all that build up!) it wasn't that bad at all. We were also fortunate to have road construction on two parts of the drive, so we had to follow a pilot vehicle where we had almost two whole lanes to ourselves during some curvy downhill sections. 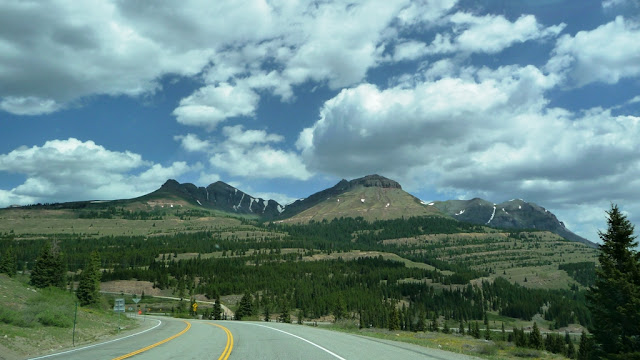 We're settled into a site on the edge of the Umcompahgre River at 4J+1+1 RV Park, within walking distance of everything in town. The sound and fascination of the rushing river right outside our door tempers the proximity of our neighbors. This looks like a great place to spend the next two weeks!


Posted by Metamorphosis Lisa at 6:57 AM